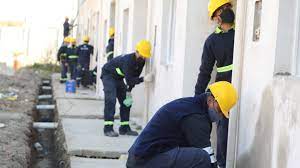 Argentina’s construction sector remains on shaky ground as costs continue to rise, while firms are still complaining about delayed payments.

While nationwide numbers are only available for September, in the Greater Buenos Aires area, construction inflation reached 77.6% in the last 12 months to October, according to figures from statistics bureau Indec.

The situation is similar in Córdoba province, where 12-month inflation to October reached 74.6%, according to the provincial statistics and census office.

In both cases, labor costs increased faster than prices of supplies.

The cost crisis has led to a situation in which bids for public works have surpassed the reference budgets by large margins.

One project affected was stage IV of section 2 of the widening of the Salado River in Buenos Aires province, which is part of the US$6.5bn Argentina Grande program that seeks to push strategic infrastructure works.

The three offers received were more than double the reference price of 12.7bn pesos (US$76mn).

Next year, Argentina is also planning to tender a 140bn-peso bridge between Corrientes and Chaco provinces.

Business associations have blamed “oligopolies” and payment delays for the cost increases.

An Indec survey of the construction sector, carried out in September, showed that firms focused on public works are slightly more optimistic than those focused on private sector contracts.

Some 22.7% of firms that concentrate on public works said that they expected activity to increase during the fourth quarter of 2022, versus 14.3% of firms who mainly carry out private works.

In both cases, over half of the respondents said they expect activity to remain unchanged.

Nearly a third of public works-focused companies (32.8%) said that policies aimed at stabilizing prices would help drive the sector better than any other alternative.

Price instability appeared to be a bigger concern for firms focused on private sector projects (25.3%) than for those working in the public sector (19.1%), though for both the biggest issue cited was delays in the payment chain (28.3% and 25.8%, respectively).

Authorities now believe the move would slow the execution of key infrastructure programs.

The public works and transport ministries are expected to merge, which would give more political weight to the government's construction plans.

Argentine construction sector under pressure to innovate amid high inflation