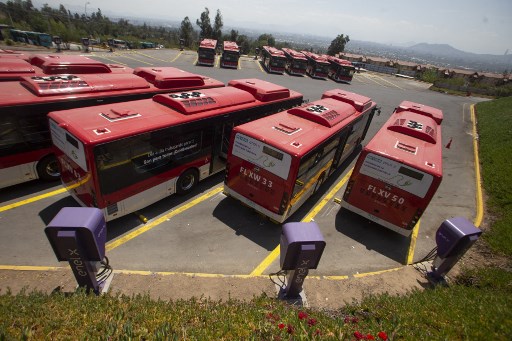 The energy transition in mobility in Chile, Uruguay and Argentina is moving forward rapidly through government programs in the Southern Cone countries as they set their sights on becoming carbon neutral by 2050.

Like other countries in Latin America, the three nations are considered highly vulnerable to climate change, with Chile still in the throes of a record-breaking drought and the other two dealing with alternating episodes of water scarcity and floods.

As of November this year there were 809 electric buses operating in Chilean capital Santiago’s RED public transport system, five years after the first units began running, according to the transport ministry.

Although questions have been raised about the way in which these vehicles were purchased, the city authorities are poised to add another 1,100 buses that were acquired in a tender, pushing the number of electric buses in the system to over 2,000 by mid-2023.

This has also entailed the installation of charging infrastructure and the city now has 324 charging points.

There also projects to expand electromobility to regional capitals such as Antofagasta, Arica, Valparaíso and Concepción.

In addition, the country is taking steps to boost production of green hydrogen (H2) and become a net exporter of the fuel, along with incorporating it into the local transport sector.

In late October the transport, energy and environment ministries, alongside representatives from academia and the private sector, signed an agreement to implement a pilot program for H2-powered buses in the second half of 2023.

As part of Chile’s electromobility agenda, the country also set deadlines last year to phase out sales of vehicles with internal combustion engines.

By 2035, the country plans to halt sales of light, public transport and mining vehicles with fossil-fuel-powered engines and, by 2040, all sales of small equipment used in construction, agriculture and forestry will also be required to use non-internal combustion engines, with that requirement being extended to freight transport vehicles and inter-urban buses by 2045.

Despite these efforts, the private sector has called for more incentives to accelerate the adoption of electric vehicles.

The first electric bus in Uruguayan capital Montevideo began operating in 2016, though the fleet of clean vehicles has grown slowly and is currently smaller than in Chile or Colombia.

As of November 2022, there were only 31 electric buses in Montevideo, although this is complemented by over 100 electric taxis in circulation.

Unlike Chile, where most efforts are handled by the central administration, local governments have been given the chance to structure their own projects.

The Montevideo city government is building its own electromobility fund, which is expected to be ready by mid-2023, the head of the city’s mobility office, Pablo Inthamoussu, said during a recent electromobility webinar organized by Portal Movilidad.

The central government is also trying to incentivize other local administrations to adopt electric buses.

Back in January the energy and mines ministry (MIEM) opened applications for departmental governments to present projects of their own. The results of this call are expected to be unveiled next year, an advisor for MIEM said during the same webinar.

As in Uruguay, electromobility has been a decentralized affair in Argentina, mainly because of the country’s federal system of government.

However, the provinces still receive a large part of their funding from the central administration, and that has limited their ambitions in terms of transitioning to clean transport amidst Argentina’s fragile macroeconomic environment.

Mendoza was the first province to introduce electromobility in its public transport system with the acquisition of 18 electric buses, but authorities have lamented that 85% of transport subsidies are concentrated in the metropolitan area of Buenos Aires.

“We would wish for the economic and financial conditions of our country to allow us to work on [electromobility], and for better links between the public and private sectors,” Daniel Vilches, president of Mendoza province bus and light rail operator STM, told BNamericas at the Latam Mobility: Chile 2022 summit last August.

The federal government officially launched a sustainable mobility plan in late September, which includes both electric cars and natural gas-powered vehicles, due to the country’s vast reserves of the latter.

The program’s main targets include having 15,000 gas-powered buses and150,000 gas-powered trucks by 2030 and having 15% of the country’s total vehicle fleet running on natural gas by that year.

Back in October, a source from the transport ministry told BNamericas that the government wants the private sector to participate in its clean transport plans due to the need to make very significant investments.

In the 2023 budget, the federal government assigned 55bn pesos (US$358mn) to this program.

BNamericas provides a roundup of infrastructure and water news from Paraguay, Argentina and Chile.

Want to read more information about Spotlight: How Chile, Uruguay and Argentina are driving the mobility transition?