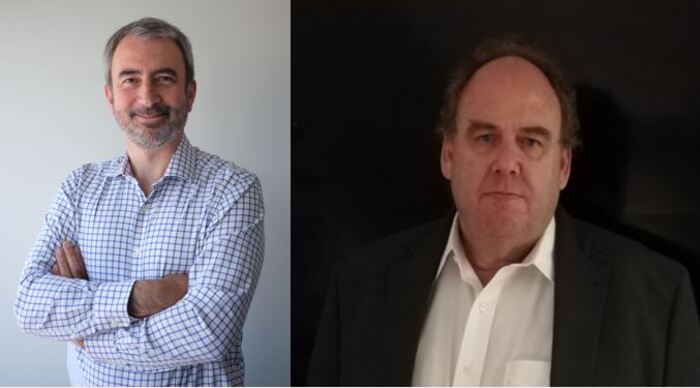 S&P Global forecasts worldwide copper demand, largely driven by the boom in electromobility and renewable energy, will double to around 50Mt/y in 2035 and Vizcachitas is looking to get in on the act.

The project is in Valparaíso region, 120km from Santiago. Large copper mines such as Los Pelambres, Los Bronces and state miner Codelco’s El Teniente and Andina are also in central Chile.

But the project has not been without its problems. Environmental groups and the mayor of Putaendo, the nearest town, have made efforts to prevent the development of Vizcachitas. They consider it a threat to the environment and to the conservation of the Andean cat, an endangered species that lives in the area.

BNamericas spoke with Santiago Montt, interim CEO (on the left in photo), and Eduardo Covarrubias, executive chairman of the board of Minera Vizcachitas (on the right).

BNamericas: At what stage is the Vizcachitas project?

Covarrubias: We are advancing in the prefeasibility study that will show that the project is robust from a technical, economic and socio-environmental point of view. Due to its magnitude, this project plays a fundamental role in trying to cover the global deficit of copper for the coming years, which is an essential requirement if we want to achieve electrification and face climate change.

BNamericas: What kind of production are you referring to?

Covarrubias: We’re talking about a project that could generate more than 150,000t/y of copper for many years.

Montt: It’s the most important greenfield project Chile has in the pipeline. If you review the [state copper commission] Cochilco mining project database, it can be seen that the majority are brownfield projects or expansions.

Covarrubias: It's a project that is adopting the best practices of sustainable mining. We will use desalinated water, HPGR high pressure grinding which significantly reduces energy consumption and we’ll incorporate the concept of filtered tailings to reduce water consumption to less than half. That is, we’re incorporating practices of a new model of productive sustainability.

BNamericas: For the supply of desalinated water, will you build a plant or use a source already in operation?

Covarrubias: We’ll be part of a consortium with DESALA that will produce about 2,050l/s that will also supply other mining operations [in the area], as well as small farmers and rural drinking water systems. The pipeline will go up through the Petorca valley, which is one of the areas most affected by climate change. Our project will contribute to the valley that suffers from water scarcity, so it can access water and infrastructure.

Montt: DESALA's multi-client and multi-purpose model is different from the desalination model used in the northern region, where due to the characteristics of the desert, only the owners of the projects are supplied. Here we won’t use desalinated water exclusively, but it will be part of a common system and infrastructure that will benefit the region. Our idea of mining is to be an engine of sustainable development and serve as a catalyst for progress in the region.

BNamericas: When will the infrastructure to distribute desalinated water be ready and when would Vizcachitas start up?

Montt: DESALA has planned to file for environmental evaluation during the first half of 2023. Today, it’s very difficult to obtain a social license to operate in mining if desalinated water supply is not included.

Covarrubias: We aim to present the prefeasibility study during the first quarter of 2023 and then in the rest of the year and in 2024 prepare the feasibility study and the environmental impact study. We will structure the financing in 2025 and 2026. This leaves us with a potential initial date to start operations of 2028-29.

BNamericas: How will you reduce carbon emissions in equipment, transportation, etc.?

Covarrubias: The greatest energy consumption is in grinding, and by using the HPGR, consumption is significantly reduced. With regard to the fleet or equipment, we will favor electrical equipment, but the optimization in this matter will be defined in the feasibility study.

Montt: In terms of energy, we have proposed to use exclusively renewable energy. Fortunately, Chile is in a position to offer clean energy to projects like ours.

BNamericas: How are you dealing with socio-environmental pressures and Andean cat protection campaigns?

Montt: Our project is next to the Andes valley, where mining is not something unknown. The region has mining experience and the communities are interested in knowing the contribution that this mining development will bring, which could increase the regional GDP by more than 3%, according to calculations by Juan Ignacio Guzmán, a professor at the Catholic University. With the financial decentralization that the country is adopting, Vizcachitas would have a positive impact on municipal, provincial and regional public budgets.

The radical groups that don’t believe in mining as an engine of sustainable development are minorities that don’t represent the majority. We actively participate in the municipality through community programs and we meet permanently with the different stakeholders.

The Andean cat is a protected species that appeared for the first time in the Valparaíso region when our environmental qualification resolution [RCA, for drilling] was already processed. Initially, the RCA was suspended, but we were able to verify with scientific evidence that the project is compatible with the protection of the Andean cat, which was ratified by the environmental court, allowing us to drill again. We are committed to protecting biodiversity and we are working on a monitoring plan and a national protection plan for the Andean cat together with expert consultants on the subject.

BNamericas: How much employment will the project generate?

Montt: Close to 1,200 direct jobs when in operation and 5,000 direct jobs on average during construction. To this must be added contractor jobs and productive chains, where local suppliers will be privileged. There are also taxes and a series of economic and social contributions that derive from projects like this one. Another important aspect is that we won’t have a mine camp. This will allow greater integration with the community and flexibility so that workers can go up and down, avoiding the classic mining shifts.

BNamericas: What characteristics will the copper from Vizcachitas have?

Covarrubias: Clean concentrates will be produced, low in arsenic. This is something that smelters globally are looking for, as it allows them to improve their environmental indicators.

BNamericas: How are you financing the project and what is the capex?

Covarrubias: The preliminary economic assessment considers capex of US$1.9bn that will be financed basically with strategic consortiums and bank financing. We will carry out this project with high standards, and as President Gabriel Boric pointed out to Justin Trudeau in June, "Canadian companies must behave in Chile as they do in Canada."

Montt: There’s a historic opportunity for the country in terms of sustainable development in the next 20 to 30 years. The energy transition will demand more copper than the world will be able to supply in the next 10 years. Chile has the deposits, talent and human capital to meet this increased demand. Therefore, we must be able to develop more brownfield and greenfield mining, such as Vizcachitas, complying with environmental legislation and having the necessary social license to operate.

With a large majority, the initiative that postpones until January 2024 the entry into force of a law that changes the Chilean mining system was ap...

CMP filed an environmental impact study for Pleito phase 3 with the evaluation service on Wednesday.

Anglo American Chile looking to raise efficiency, cut water use in a challenging 2023

Codelco to optimize production plans and investment projects for 2023-27

Want to read more information about Vizcachitas: 'It's the most important greenfield project Chile has in the pipeline'?