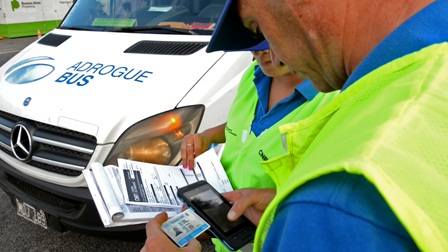 Argentina launched a digital version of the national driver's license, which can now be accessed from smartphones.

The digital license is one of the new services offered through the Mi Argentina app and will be valid throughout the entire national territory. The app is available for download from the iOS and Android stores.

The service works as a digital wallet storing the updated data of the license and its owner. It will even keep the driver informed about expiration dates and the steps about how to renew it.

Driver's identity can be validated in person, at rapid documentation centers of the national registry service (Renaper), or from the app.

In this case, it is necessary to enter the labor identification number CUIL and an email address.

Once the data has been validated, the document can be scanned with the app through a digital identity system.

The Argentine digital license comes over a year after neighbour Brazil launched its own, developed by federal data processing service Serpro.

In the beginning, Brazilians still needed to go in person to a transit department to validate their identity. A recently launched version of the digital drivers' license, however, embedded a facial biometric validation system in the application itself.

The technology allows the driver to validate the document remotely. The only requirement is that the conventional driver's license has a QR code to be read by the app.

"We sat down with Serpro and redesigned the license model. Serpro added biometrics to the application itself and crossed it with the databases of state transit departments," said Luis Felipe Monteiro, head of digital government at the finance ministry, at a Microsoft event in São Paulo on Tuesday.

According to Monteiro, the changes made the number of digital driver's licenses being issued jump six-fold, from 3,000 to about 18,000 a day.

Brazil has 100mn vehicles registered to around 60mn drivers.

The industry invests US$2bn per year, but price controls are hampering companies' plans.

Hughes Network's strategy for Argentina: The sky's the limit