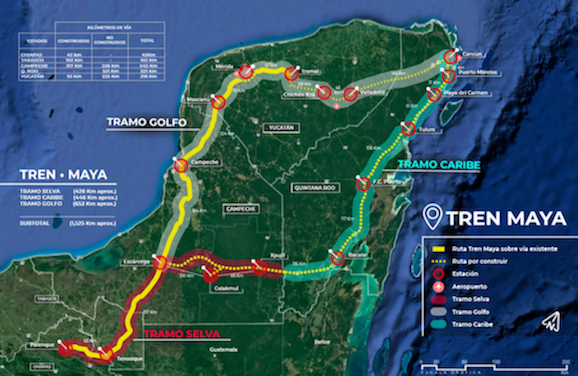 The Mexican government shared more information on its plans for the Maya train, the 1,525km passenger rail project that President Andrés Manuel López Obrador (AMLO) is proposing to build in the southeast of the country.

Speaking to reporters following a meeting between AMLO and members of his cabinet, Rogelio Jiménez Pons, director of national tourism promotion fund Fonatur and the official directly in charge of the project, said authorities are still discussing the model to be used for the contracts to carry out the project, which is expected to include both private and public sector participation.

Jiménez confirmed that the construction of the line will be tendered in seven different contracts, which are expected to be worth more than US$1bn each, local press reported.

The first three tenders for stretches where a railway already exists (Palenque-Escárcega, Escárcega-Yucatán and Yucatán-Chichen Itzá) will be launched this year, after final details are worked out with the finance ministry (SHCP).

Due to the type of works required for each contract, it is expected that interested companies will participate in consortiums with other firms.

Works on those three sections are scheduled to begin by the end of this year. Meanwhile, construction on the sections with no existing railway - which include the stretch linking Escárcega to Cancún - are expected to start in 2020.

In the case of the section that will cross the Calakmul ecological reserve in Campeche state, authorities are facing two route options for the line. One would be to follow the route of an existing highway and the other one would be the route of installed power lines. The precise environmental impact the project may cause will be assessed until a choice is made, Jiménez was reported as saying by local paper El Financiero.

The federal government hold rights of ways for both route options.

Regarding the rolling stock for the project, which will be provided under a different contract, Jiménez said that some international firms from Europe, Canada and China have expressed their interest in participating.

Meanwhile, transport and communications minister Javier Jiménez Espriú said that some of the technical studies for the train, including some geological and environmental impact analyses, will be conducted by a group of experts from national university UNAM and state-run power utility CFE.

The minister also said that AMLO proposed some small changes to the project's proposed route with the aim of speeding up construction, local paper El Sol de México reported.

The construction of the electrified double track will be in charge of Sedena and the consortium made up of Grupo México and Acciona.

With a budget ceiling of 11.5bn pesos, the infrastructure program will end in 2024.

Mexico rolls out studies for anti-flood infra in Tabasco state

Brazil becomes unlicensed spectrum leader in LatAm – why it matters