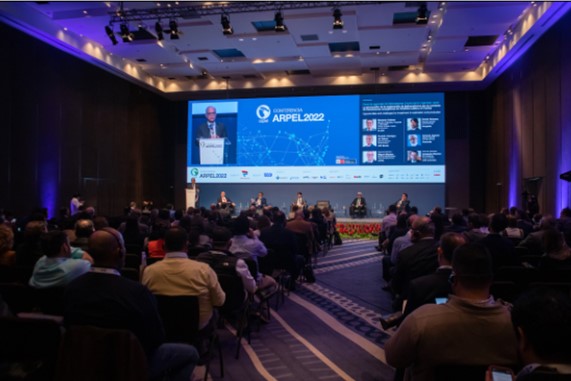 On the second day of the ARPEL 2022 Conference, a meeting organized by the Association of Oil, Gas and Renewable Energy Companies of Latin America and the Caribbean, the most important leaders of the sector, meeting in Lima, Peru, analyzed the moment of transition, with the confirmation that a future of lower carbon emissions and renewable energy will not do without oil and gas as primary sources of supply.

Within this framework, Latin America has a latent opportunity to continue advancing as a reliable and global supplier of energy. To do this, the region needs to intensify investment in exploration which, according to the Gas Exporting Countries Forum (GECF), is currently only equivalent to 6% of global investment. Added to this, stable regulatory frameworks and public policies are required at a time when competition for capital is intense at a global level.

"The accelerated energy transition does not mean that Latin America stops taking advantage of its hydrocarbon wealth," said the former President of the ANH of Colombia, Armando Zamora, during the Panel of Hydrocarbon Agencies focused on promoting exploration in a context of energy transitions .

"And it is that the future of energy will go hand in hand with gas and oil," added Marta Vieira Abrao, General Manager of Application Technologies and Exploration Data at Petrobras; to which Rodolfo Henrique de Saboia, Director General of the ANP of Brazil, added: "We cannot afford to live without fossil fuels because they will continue to be important in the energy matrix in the years that follow."

Additionally, specialists consider that Latin America has shown a strong commitment to decarbonization and climate change mitigation, since a third of its energy matrix comes from renewable sources and its greenhouse gas emissions barely reach 8% of the total. world. “Latin America is the greenest region on the planet,” said OLADE's Director of Studies, Projects and Information, Medardo Cadenas.

In this sense, Annand Jagesar, General Director of Staatsoile, of Suriname, emphasized that "Latin America deserves to guarantee its energy security through the use of fossil fuels."

That is why from 2025 "we will see a rising market that will underpin long-term investments, especially in Latin America," said Rystad Energy Senior Vice President and Manager for Latin America, Schreiner Parker. The reason? until 2030 the planet will demand an average of 63 million barrels of oil per day.

Faced with this scenario, how could Latin America increase its participation in the international gas market? On this point, Rafik Amara, GECF Senior Gas Market Analyst, stated: "Latin America and the Caribbean are already in the international natural gas market and, to increase their presence, they require a greater volume of investment in exploration and production”.

Amara pointed out that the opportunities for Latin America on the international scene are diverse and are anchored in Liquefied Natural Gas (LNG) projects in countries such as Trinidad and Tobago, Peru, Suriname, Mexico and Argentina, among others, in addition to integration through of gas pipeline networks within the continent.

Added to this, there is the conviction that the region is entering a period in which the future of exploration and production is also offshore. By way of confirmation, the data handled by Rystad Energy speak of a 17% increase in investment in the Latin American offshore by 2025.

However, this necessary increase in hydrocarbon production to meet demand must be accompanied by decarbonization actions. Such is the case of the Colombian Ecopetrol, which, in the words of its Vice President of Exploration, Elsa Jaimes, aims to reach 2050 with zero carbon emissions and with a diversified business model between hydrocarbons and renewable energies.

THE REGIONAL DOWNSTREAM IS STRENGTHENED WITH THE TALARA REFINERY

The future of refining and downstream in Latin America and the Caribbean was also part of the agenda for the second day of the ARPEL 2022 Conference.

Walter Cánova, Vice President of Refining and Industrial Processes at Ecopetrol, Claudia Kalamar, Refining Manager at ANCAP, Alejandro Vago, Refining Director at Raízen, Fabián Lombardi, Downstream Technical Manager at PAE/Axion and Gustavo Chaab, Executive Refining Manager at YPF, gave the required level to a panel in which the present and future challenges for this part of the hydrocarbon production chain were discussed.

In this sense, the day was propitious to learn more about the modernization project of the Talara Refinery, undertaken by Petroperú. Oscar Vera, Refinery Manager, said that this project opens a new era for the Peruvian downstream.

Built under the highest international standards, Talara is considered one of the most modern refineries in Latin America with a capacity to process up to 95,000 barrels per day of heavy and light crude oil, both existing on Peruvian soil and in other parts of the planet. A fundamental element is that, in addition, the production of gasoline and diesel will have a maximum content of 50 parts per million of sulfur, which translates into environmentally friendly production.

The refinery complex has 16 process units and five packages of auxiliary units and complementary services, two liquid loading docks and 21 new storage tanks, positioning it as one of the most important deep conversion refineries in Latin America.

ARPEL is a non-profit association that brings together oil, gas and renewable energy companies and institutions in Latin America and the Caribbean. It was founded in 1965 and its partners currently operate in more than 30 countries in the region and include national and international operating companies, providers of technology, goods and services for the value chain, as well as national and international institutions in the sector. .