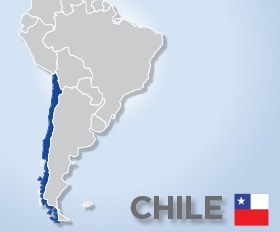 Chile's government and the national cargo transport confederation (CNTC) are holding talks regarding toll rates and safety installations on the country's two busiest highways under concession arrangements, national routes 68 and 78.

CNTC drivers took to block lanes on 68 and 78 over the weekend in disaccord of the implementation of a toll scheme that raises rates during peak hours.

The two sides had held negotiations for three months to no avail before the protest began, CNTC said in a statement.

Increases in toll rates are allowed under the concession contracts held with the highway operators.

CNTC claims the government moved to implement the changes in order to reduce congestion when traffic volumes are the highest during the January and February holiday months.

Ultimately CNTC lifted the protest after the government agreed to modify the toll scheme by lowering application of the peak hour toll scheme by 20 days, as well as other considerations. The two sides will continue to meet this week with the goal of reaching a permanent solution, local media outlets reported.

Moreover, Chile's public works ministry (MOP) will oversee a project on 78 to construct a rest area for drivers as well as to expand the rest area on 68.

MOP, along with the finance, transport and interior ministries, will also form a working group to review toll schemes during peak hours in order to address the matter in future tender proceedings for the highway concessions.

Route 78 covers 133km between capital Santiago and the port city of San Antonio, where highway operator Autopista del Sol, a subsidiary of Spain's Abertis, holds the concession through 2019.

Meanwhile, Abertis has presented plans to expand highways under its operation in exchange for extensions to concession periods. The Barcelona-based company operates around 772km of highway in Chile.

BNamericas speaks with Jorge Flies, governor of the Magallanes region, about the most important projects for the remote part of the country, as wel...