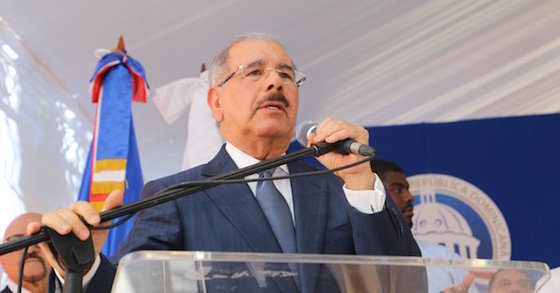 Danilo Medina (pictured), president of the Dominican Republic, has vowed to build an aqueduct in Monción municipality, Santiago Rodríguez province.

"I have listened to your demand for an aqueduct," the president said in Monción, promising to pay attention to the needs arising from water shortage.

Representatives from the national institute for potable water and sewerage (INAPA) would be dispatched to the municipality and carry out relevant pre-investment studies, Medina said.

The president added that an aqueduct in the area was already on the agenda during his 2012 campaign, and that he remains committed to the project.

"We will see what is happening [with the delay], if it is a matter of funds or of water supply, because I gave the directive that I wanted an aqueduct to be built in Monción some time ago," the president said.

Santiago Rodríguez province has been suffering under a prolonged drought, significantly affecting water supply for human consumption and irrigation in the municipalities of Monción, Sabaneta, and Villa los Almácigos.

The San Ignacio de Sabaneta aqueduct to serve the province, opened in 2011, is out of service today because of operational problems.

Authorities have been planning an aqueduct that draws water directly from the Mao river, with an accompanying water treatment plant in Meseta to serve these three municipalities.

The troubled Brazilian construction firm will also be barred from participating in any future public contracts.

Completion of the first phase of Santo Domingo's eastern aqueduct required a US$30mn investment. The project's second phase is scheduled to be comp...

Water to be top priority for Medina's second term

Trump and the Latin America card