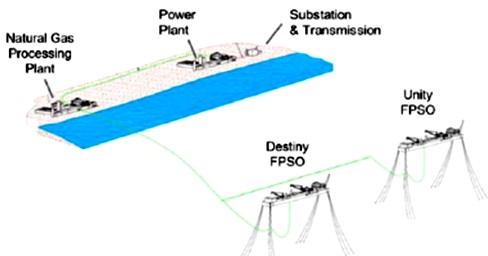 Guyana’s Environmental Protection Agency (EPA) has greenlighted the project to land natural gas onshore from the Liza field in the Stabroek block.

The authorization was granted to Esso Exploration and Production Guyana (EEPGL) and “includes but is not limited to, installation and operation of riser tie-ins at two floating production, storage, and offloading (FPSO) vessels for supply of gas, subsea equipment, offshore pipeline and onshore pipeline; construction and operation of a natural gas liquids (NGL) plant,” the environmental permit reads.

The EPA said it “is satisfied that the project can be conducted in accordance with good environmental practices, and in a manner that avoids, prevents and minimizes any adverse effects which could result from the activity.”

It added, “the technical reviews and recommendations from a team of independent international experts, the public inputs at the scoping stage, views expressed by members of the public during consultations, the submissions made after the EIA was submitted for public review, and all other relevant considerations, indicate that the project is environmentally sound and in the public’s interest.”

EEPGL estimates the project will cost 260bn Guyanese dollars (US$1.24bn) and take three years to complete, according to the EIA.

The gas will come from FPSOs Liza 1 (Destiny) and Liza 2 (Unity), which are in production, and the offshore (218km) and onshore (25km) pipelines will transport around 50 million cubic feet per day of gas to the NGL processing plant. The latter will sell NGLs to third parties and dry gas to the associated 300MW power plant.

The government recently announced that CH4/Lindsayca was the top ranked group to build the power and NGL plants.

Plans to land natural gas onshore have made important strides in recent months.

Joint Statement from the Export-Import Bank of the United States and the Co-operative Republic of Guyana on the Sig...