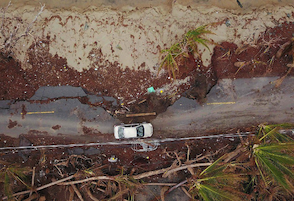 Puerto Rico's road network was badly damaged by Hurricane Fiona and could suffer new deterioration from more heavy rain expected to fall in the coming days.

The US National Hurricane Center was reported to be monitoring the development of three new storm systems in the Caribbean which could cause new flooding in Puerto Rico.

The state of the road network has already been deemed to be "concerning" following the amount of rain that has fallen since September, according to the transport and public works ministry (DTOP).

Some 26 stretches of highways around the country remain closed, DTOP minister Eileen Vélez Vega was reported as saying by El Nuevo Día.

"This is a concerning situation because we had too much rain even before Fiona, and it hasn't stopped after the hurricane. We need better weather so we can get out there and carry out works,” she added.

The damaged highways include PR-861, PR-143, PR-1, PR-763, and highway 920, where a bridge collapsed in Yabucoa, affecting people in the Jácanas Granja area.

The island will receive additional funding under an infrastructure law the US congress has just approved.

Puerto Rico has received seven proposals to reconstruct a runway, while Barbados and the Bahamas are getting ready to launch their airport PPP tend...

Ecopetrol recorded a record in asphalt exports in September