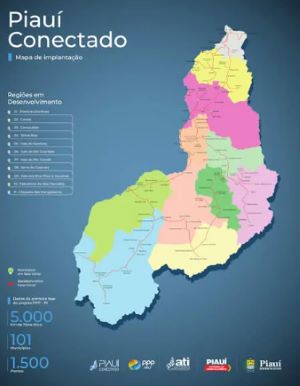 Japanese fiber and optical equipment Furukawa has supplied over 11,000km of fiber to Piauí state's signature backbone project, Piauí Conectado, and is preparing to deliver further cabling as the network expands, the company said in a statement.

The company is the chief supplier for the project. In addition to cables, the Japanese group said it has provided splice boxes, GPON equipment (OLTs and ONUs), network monitoring software and support services, among other things.

Piauí Conectado is considered the country's first public-private partnership (PPP) for the telecoms sector. Studies and modeling of the project began in 2015 and the bidding process was launched in October 2017.

In 2018, the process was concluded with Global Task being selected as the PPP's private sector telecom partner for a 30-year concession. Investments in the network were estimated at 396mn reais (US$76.1mn).

Since 2018, the contract has received four amendments, the latest of which was in June 2021, when the state government issued a new work order for an expansion of the project to 224 municipalities, from the original 101, for an additional 182mn reais.

The backbone is now 70% complete and its infrastructure is already prepared for new technologies such as 5G, according to Global Task. The concession holder also deployed 225 access points for the state’s Wi-Fi program, in addition to connecting to government agencies and services.

Global Task is currently wrapping up a northern fiber ring in the state, connecting capital Teresina (pictured) to Parnaíba, Piauí’s second largest city, with a total of 400GB of available capacity, also with Furukawa’s equipment.

Once this process is concluded, it plans to launch a public offering, possibly in January, for "all services inherent to the network, fiber, transport, link, DWDM, etc.," Global Task president Edson Ribeiro said in an event in September.

At the time, the executive also said that the PPP signed a non-disclosure agreement with a 5G-licensed mobile carrier for the lease of the fixed network, although the details could not be provided.

Piauí Conectado has contracts signed with 80 internet service providers (ISPs) for the use of the backbone, according to Ribeiro.

In addition to the Piauí backbone, Global Task won contracts for a project of video monitoring in Campo Grande, Mato Grosso do Sul state, and for digital and connectivity projects in Tocantins state and in the cities of Hortolândia, Peruíbe and Itanhaém in São Paulo state.

The Tocantins and Peruíbe projects are backed by the science, technology and innovation ministry (MCTI).

Furukawa is a manufacturer of solutions for communication and energy infrastructure, with plants in Curitiba, Sorocaba and Santa Rita do Sapucaí in Brazil.

Veloso Net has teamed up with China’s Huawei to install antennas and related infrastructure deep in the jungle with the deployment now reaching the...

The initiative aims to strengthen connectivity and optimize communication between teams that provide humanitarian support in the region.