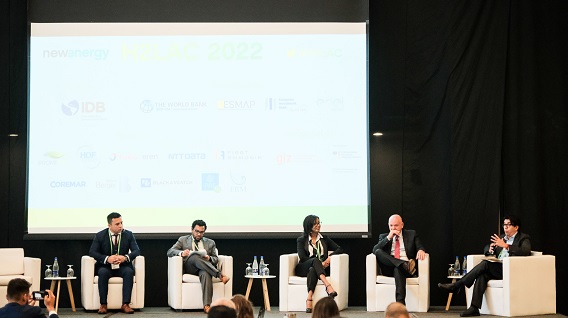 Decarbonizing local industries and promoting regional collaboration in areas including certification system standardization were identified during an international summit as among initial objectives for Latin America’s nascent green hydrogen sector.

Decisionmakers from the spheres of government, finance and industry gathered recently in Colombia for H2LAC 2022, organized by US company New Energy Events and co-hosted by regional development bank IDB.

Decarbonizing domestic industries is seen as serving two objectives. “The first, naturally, is reducing carbon emissions in the region and the second is that, via this process, necessary knowledge is obtained to, later, generate green hydrogen for export,” Salas said.

Latin America has a growing portfolio of green hydrogen projects of different configurations and sizes on the drawing board. Mobile testing-scale units are in operation and trailblazer Chile is building a pilot production plant.

Salas added that Latin America could leverage its experience across the hydrocarbons value chain.

“Latin America has two important advantages: its existing renewable energy capacity – and potential – in every country, and it has special know-how in oil and gas industry management,” Salas said. “This is important since the hydrogen value chain is as complex as that of the hydrocarbons industry.”

To help ease the flow of investment into the region, decisionmakers also underscored the importance of cooperation and joint planning between countries in areas including transport standards and product certification systems that identify whether hydrogen is “green” or otherwise. In terms of certification, IDB is playing a coordinating role and offering technical assistance to countries in the region.

“It’s important to generate a regional certification system, to have a regional, integrational vision,” Salas said. “It makes investment more efficient … and at the end of the day, carbon emissions don’t respect borders.”

Read BNamericas’ coverage of the event: