Paraguay seeks to accelerate the start-up of Omega Green, from Villeta, for the production of biofuels 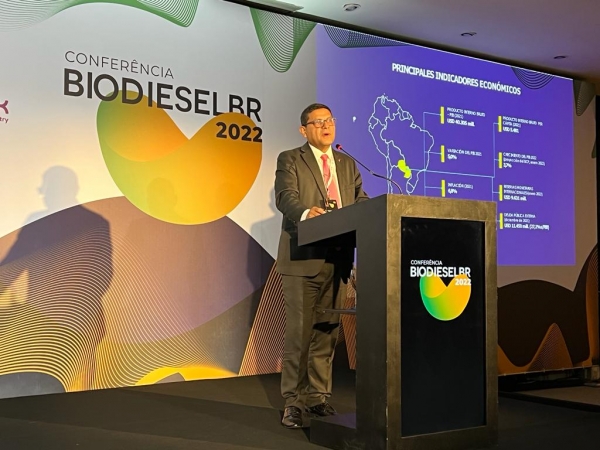 This Ministry of Industry and Commerce release was published using machine translation.

At a time when international fuel prices are being discussed, Paraguay is seeking to accelerate the start-up of "the largest all-vegetable diesel industry, using our energy, and even become an exporter," said Pedro Mancuello, Vice Minister of Commerce and Services of the Ministry of Industry and Commerce (MIC), who is in São Paulo, Brazil, participating in the largest meeting in Latin America of biofuel producing entrepreneurs, which concludes on Tuesday the 8th.

In a communication from the headquarters of the "Brazil Conference", Mancuello announced that due to the global crisis in diesel production, Paraguay is looking for a prompt production of biofuel, referring to the Omega Green plant, an integrated complex that will be located in the Villeta industrial zone, 60 kilometers from Asunción, which will produce Renewable Diesel (HVO) and Renewable Jet Fuel (SPK).

The ECB Group firm is in charge of developing the Omega Green Project in Paraguay, a company with extensive international experience in agribusiness and biofuels.

According to technical data, ECB is projected to produce 20,000 barrels/day (294 million gallons/year) of renewable diesel, renewable jet fuel and other by-products. This facility will use UCO (used cooking oils), animal fats and soybean oil that will be transformed by hydrotreating into diesel or jet fuel.

"Large biofuel producing companies from Brazil and Latin America participate in this meeting and discuss their energy policies. Many look to the region to expand. The vegetable diesel industry is a great opportunity for our country, because we can even become exporters. I believe that it is a great opportunity that we have to not depend on fossil fuel and international prices, and all those resources would remain within the country!", said the Vice Minister.

Vice Minister Mancuello made a presentation in Brazil called "Opportunities for the development of renewable energies in Paraguay", at the meeting of international impact that takes place at the Tívoli Hotel in Sao Paulo.

The Vice Minister met with the main director of Omega Green, Erasmo Carlos Batistella, in order to review the new dates of the project that is being finalized in Paraguay, taking into account the current situation of diesel.

The Vice Minister of the MIC said that there is much expectation with this project in Paraguay, which will provide a perfect substitute for traditional fossil fuels.

The biofuel that Omega Green will produce aims to turn the country into a net exporter of 100% renewable diesel, which also has up to 85% less polluting emissions.

Deputy Minister Mancuello said that the businessman Batistella is in permanent contact with the main authorities of the Ministry of Industry and Commerce with the intention of speeding up the opening of Omega Grenn. According to the current schedule, the company intends to start construction works in 2023.

In his presentation at the "Brazil Conference", Erasmo Batistella referred to the benefits of Paraguay, saying that it is a country with 100% renewable energy, with advantageous tax and legal regimes and with many opportunities. After his presentation, the MIC representative spoke, who alluded to the comparative advantages of the country for the establishment of investments.

Modernization projects will allow Petropar to control the plants remotely

Modernization projects will allow the plants to be controlled remotely

Paraguayan lawmakers analyze the creation of a Ministry of Energy, Mines and Hydrocarbons

Petropar explores a foray into the aviation fuel market

Want to read more information about Paraguay seeks to accelerate the start-up of Omega Green, from Villeta, for the production of biofuels?