Peru's credit rating remains the second best in Latin America and will enable the country to regain economic strength, even though Moody’s downgraded it from 'A' to 'Baa1' last year.

The rating “can withstand many of these potholes [of uncertainty], but the signs of confidence for the private sector need to be reinforced,” Moody’s VP senior credit officer Jaime Reusche, told a press conference related to the Inside Latam: Perú 2022 event.

According to Moody’s, Peru has wasted opportunities to increase production and employment in the last 18 months, specifically because it didn’t take advantage of favorable terms of trade.

Public debt is expected to reach 35% of GDP in 2022, while the median for countries with similar ratings is 55%. 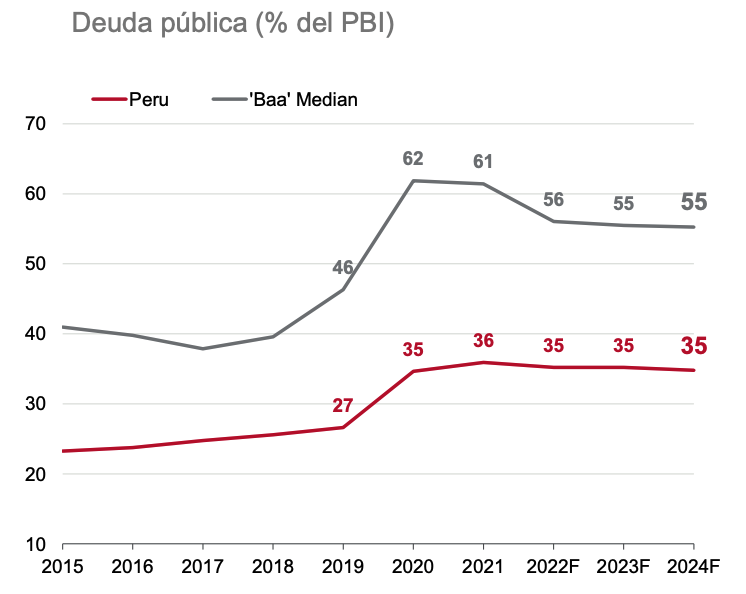 "Although the composition of state spending has deteriorated, it has not been enough to generate an irreversible dynamic. The blows are reversible, but they cause concern in the medium term if there is no reaction from the government to promote and create confidence in the private sector," Reusche said.

While a ratings downgrade might not be on the horizon, macroeconomic indicators are set to deteriorate. Moody’s expects a 4% drop in private investment in 2022 and a rebound of only 1.5% next year.

Moody’s maintains a 2.5% GDP outlook for this year. The 3% projection for next year is likely to be revised to 2.5%. Conversely, the central bank expects 3% for 2022 and 2023. Reusche said, however, that low growth could become a “trap and that would weigh on the rating.”

The reference interest rate will reach 7.5% at year-end, compared to 7% currently, and remain at that level throughout 2023, Moody’s projects.

“A peculiarity of Peruvian inflation is that the difference between total inflation and underlying inflation – price level excluding the price of food and energy services – is much higher than that of other countries in the region,” Reusche said.

The country's central bank expects production to "normalize" in 2023.

The importance of multi-stakeholder dialogue for the Peruvian mining sector

BNamericas spoke with Miguel Incháustegui, an independent director at Candente Copper and a former energy and mines minister.