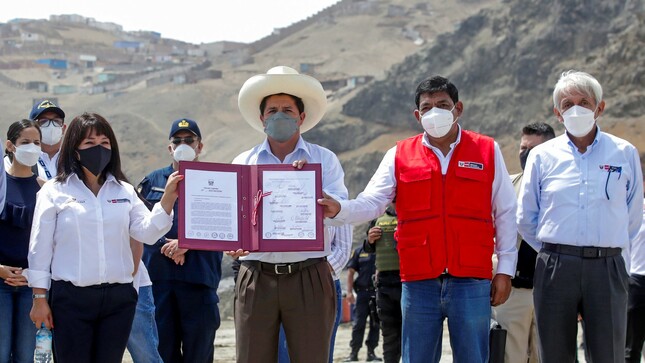 Lima, January 25, 2022.- Through Supreme Decree No. 003-2022-MINAM, the Government declared the climate emergency of national interest, in order to execute, as a matter of urgency, measures to implement actions in accordance with with what is established in the Nationally Determined Contributions to the year 2030, (Our Climate Challenge-NDC).

Thus, our country contributes to the global purpose of limiting the increase in the planet's temperature and aligned with the Sustainable Development Goals, economic reactivation, reduction of socioeconomic gaps and reduction of risks and vulnerability to the adverse effects of climate change. climate.

In accordance with the aforementioned legal norm, the priority actions that provide support to the climate emergency are: climate governance, climate change education, monitoring and follow-up; climate finance; and human rights and climate justice.

As part of this declaration of climatic emergency, the rule states that different priority actions must be carried out within a period of no more than one hundred and eighty business days, counted from the entry into force of said rule. Likewise, it is mentioned that the regional governments, in coordination with the Ministry of Agrarian Development and Irrigation and the competent authorities, will prioritize actions to reduce deforestation.

Likewise, at the proposal of the Ministry of the Environment (Minam), the update of the National Strategy for Climate Change with a view to 2050 will be approved this year.

Among other strategies, the design is established, in coordination with the competent authorities, promotion mechanisms for electromobility with emphasis on urban transport. The Supreme Decree also indicates the implementation of institutional and legal arrangements and technical guidelines that allow, in an efficient manner, to implement natural infrastructure projects, mainly in the headwaters of hydrographic basins vulnerable to climate change. The aforementioned legal norm is the result of joint work between the different sectors of the government and has been endorsed by the Presidency of the Council of Ministers and the Ministries of the Environment, Energy and Mines; Agricultural Development and Irrigation, Production, Transport and Communications; Housing, Construction and Sanitation; Health, Foreign Affairs, Economy and Finance; Justice and Human Rights; Education, Development and Social Inclusion; Defense, Culture, and Women and Vulnerable Populations.

This Supreme Decree gives a sense of urgency to the implementation of the NDCs that Peru has committed to in the face of climate change, through 84 adaptation measures and 62 mitigation measures, which are part of our NDCs, within the framework of the Agreement from Paris.

- Here you can access the full text of the standard .