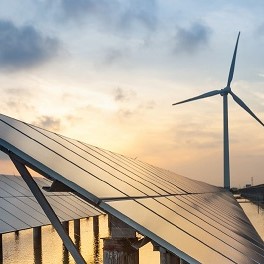 With a 2050 decarbonization goal, the country is working to boost electric vehicle adoption and develop a green hydrogen industry.

A dominant role is played by vertically integrated state-owned utility UTE, which operates across the generation, transmission, distribution and commercial segments.

A 1997 sector reform law became operational in 2002, opening the door for competition in generation and establishing a wholesale power market, among other changes. Today, independent power producers account for a large chunk of installed capacity, but virtually all production is sold to UTE, limiting the role of the wholesale power market.

Against this backdrop, a change may be coming that helps pave the way for bilateral power-purchase agreements between generators and private offtakers and may spur investment in associated new plants.

Energy minister Omar Paganini recently indicated that, to help attract investors such as datacenter operators, the country must leverage the low-cost electricity produced by renewables. The price of industrial medium-voltage electricity supply in Uruguay is US$123/MWh, above Paraguay (US$39/MWh), Chile (US$101/MWh), Brazil (US$110/MWh) and Argentina (US$122/MWh), according to an October report from Uruguayan energy consulting firm SEG Ingeniería.

The government is circulating an associated draft decree that would recognize the firm capacity of renewables plants. Uruguay’s regulatory framework currently permits a market where contracts can be entered into between private generators and private clients, but rules only recognize thermoelectric plants as those being able to provide firm capacity.

“There is regulation but for various reasons – among them the issue of firm power, but not the only one – until now there have been no contracts between private parties,” Fernando Schaich, founder of SEG Ingeniería, told BNamericas. “However, there are already some movements in the market that could indicate that this may change in the short and medium term.”

“I understand that it would definitely trigger new plants,” said Schaich. “In fact, it is already happening, but timidly – there is a 10MW plant under construction that is supposed to sell to private parties. The other issue that is a barrier today for this market to develop is the price of electricity tolls. Although Uruguay has very high renewables installed capacity – registering a surplus at times – Uruguay will soon have to incorporate more capacity, certainly solar PV, and perhaps an incipient market between private companies could be a good tool.”

ALSO READ: How and when Uruguay plans to expand its power generation park

If Uruguay advanced along the private PPA highway, it would join neighbor Argentina, where demand from industry has been driving investment in new renewable energy plants. In Argentina, like many other countries in the region including Chile, a hurdle facing areas with favorable renewables resources is grid congestion. Restricted space on some lines has limited the amount of priority transmission dispatch capacity wholesale power market administrator Cammesa has been able to award to developers.

On transmission priority dispatch and capacity in Uruguay, Schaich said: “That is a matter that does not have a single answer. It depends a lot on the geographical location of the plants. If we are talking about medium-voltage connected plants, to the 30kV system for example, I don't see any problems in the short term. For larger plants, of 100MW and above, the capacity is already more restricted in areas with good resources. In any case, it is a matter that UTE handles with its technical team.”

The document was presented to system stakeholders this week.

The local fintech industry has already provided feedback on draft regulations – secondary legislation – drawn up by the central bank, BNamericas is...

Mercosur-EU agreement at risk of collapsing