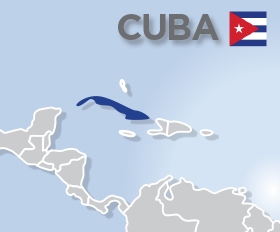 The development of Cuba's telecom sector depends just as much on local legislation update as it does on the US changing its legislation to allow companies to invest on the island, according to consultancy 4G Americas.

"The entry of operators needs to be allowed both by Havana and Washington," said José Otero, director for Latin America and the Caribbean, during 4G Americas' webinar on mobile connectivity in the Caribbean.

Otero added that while Washington has some sway, Havana has the last word on who is allowed to invest in Cuba and how it is done.

However, Otero said he was certain that President Raúl Castro's government would not block investment. "I doubt that if businesses offer sizeable investments, which can help development of the country, Havana wouldn't say no," he said.

However, US legislation also needs to change regarding Cuba to allow invest in the country. Washington currently penalizes not just US companies, but also international firms that enter into business agreements with Havana.

"If there are no changes in US legislation regarding Cuba, it will be hard to see any great investments any time soon," Otero said.

Cuba has some of the biggest investment potential in telecommunications in the whole of Latin America, with just 28.2% mobile penetration, according to 4G Americas.

Since the rekindling of relations between the US and Cuba last year, changes have been afoot on the island in terms of the telecom sector and investment. Several US companies announced the beginning of operations in Cuba, from streaming service Netflix to accommodation website AirBnB.

US mobile operator Verizonalso announced the start of roaming services on the island in September, becoming the first US provider to do so.

Cuba was considered for the first time by UK broadband comparison site Cable, reaching position 82 while Mexico fell to 85.

BNamericas provides a roundup of the week's most important ICT news in Latin America.