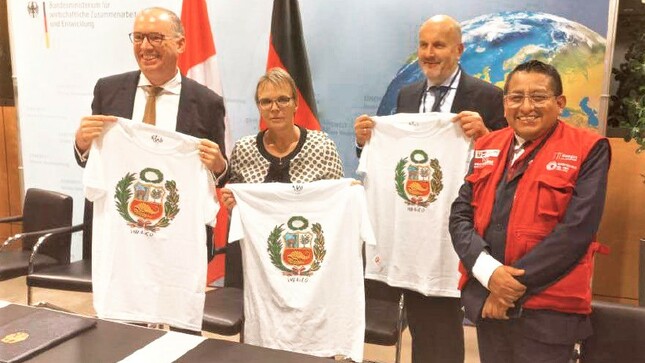 As part of the commitment to care for the environment and actions to mitigate climate change, the Ministry of Transport and Communications (MTC) participated, through the National Program for Sustainable Urban Transport (Promobilidad), in the Intergovernmental Negotiations on Cooperation for Development between Peru and Germany.

In these negotiations, it was announced that the German Government, through the German Development Bank - KFW, will make a donation of 24 million euros for the planning and implementation of bike lanes in intermediate cities in Peru.

The main objective of this donation is to contribute to the improvement of air quality by reducing greenhouse gas emissions from the vehicle fleet and which cause air pollution in cities.

Along these lines, the Berlin headquarters of the Federal Ministry for Economic Cooperation and Development (BMZ) hosted, in the first week of November, the bilateral meetings led by the Parliamentary State Secretary of the BMZ, Niels Annen.

The meeting was attended by the executive director of Promovilidad, Pablo Félix Luciani, representing Minister Richard Tineo Quispe, as well as officials from all ministerial portfolios and the Embassy of Peru in Germany.

This meeting between both nations also served to evaluate triangular cooperation projects, present new cooperation requests, especially to support Peru's aspiration to join the Organization for Economic Cooperation and Development (OECD), as well as receive the German commitment to allocate 229 million euros for the execution of technical and financial cooperation programs for the period 2022-2023.

During the intergovernmental negotiations, Peru and Germany renewed their traditional cooperation ties and analyzed the different bilateral projects that are being developed in Peru, such as the north-south trunk of Trujillo BRT buses, which will benefit 1 million inhabitants of the province and which already has the feasibility of the project granted by the Ministry of Economy and Finance (MEF) since April 2022.

A key aspect to improve air traffic is a more assertive role by the State, BNamericas was told.

A total of 19 chargers, 5 JuicePump chargers of 60kW and 14 Juicebox will be installed at the toll stations on road network 4 and at the headquarte...

Tren Grau: the US$32 billion rail project that seeks to connect the Peruvian coast

Want to read more information about Peru will receive a German donation for the execution of sustainable bike paths for 24 million euros?