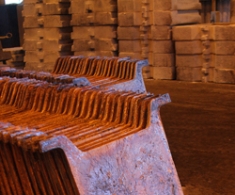 In its latest quarterly review of the market, Chilean state copper commission Cochilco lowered its average price forecast for 2016 to US$2.15/lb, compared with US$2.50/lb in its 3Q15 report.

For 2017 the agency is expecting a slight improvement in market conditions, forecasting an average price of US$2.22/lb.

Cochilco was forced to revise downward its price forecast in every single quarterly report in 2015.

And while that is unfortunate for the state of Chile's coffers, given its dependency on the ups and downs of the red metal, the agency has been right to do so as its final forecast for 2015 was US$2.53/lb, while the realized price was US$2.49/lb.

The downward spiral picked up pace during the latter half of last year, when it dropped to an average of US$2.39/lb in the third quarter, finishing at US$2.22/lb.

And while the lower price scenario is not positive for Chile, the agency remains somewhat optimistic, as it anticipates a slight recovery for next year to US$2.20/lb, as it noted that if low prices continue to prevail, some producers will be forced to reduce production, although cuts will have to be of a significant magnitude to affect prices over the next few years.

Cochilco said the strength of the US dollar was one of the main factors impacting the price of copper last year, with the greenback further bolstered by the Federal Reserve's decision to raise interest rates for the first time in close to a decade in December.

In Europe, another major consumer of copper, while economic growth was better than expected in the third quarter, at 1.6% year-on-year in the Eurozone, there are still concerns for the recovery of the continent's economy, which is why the quantitative easing program put in place by the European Central Bank is expected to continue this year, as ECB president Mario Draghi hinted recently.

China's GDP grew 6.9% in 2015, its lowest annual rate in 25 years, as the country's leadership is trying to move to a consumption-driven economy.

The prospects for stronger growth in the coming years are not promising, as Chinese authorities are forecasting GDP will expand 6.8% this year, while for its 5-year plan (2016-20), the government has established minimum growth of 6.5%, Cochilco said.

Cochilco said it expects global demand for refined copper to grow 2.3% in 2016 compared to a projected decline of 0.5% last year. The agency is now expecting demand in 2017 to expand 2.6%.

The figure was in line with its previous report – in which demand was expected to grow 2.2% this year.

In terms of copper production, Cochilco lowered its projection as a result of the cuts announced by several mining companies during last quarter, and it now expects global output to grow 4.6% to 19.96Mt in 2016 and 2.2% to 20.4Mt in 2017, compared to its third quarter forecast of 19.2Mt for 2016.

The government agency expects copper output in Chile to be 5.77Mt this year, below its third quarter estimate of 5.90Mt, as a result of cuts. Production for 2017 is forecast to reach 5.95Mt.

There are 764 tailings dumps dotted across the country, of which 473 are inactive and 173 abandoned, according to a survey by national geology and ...

The first attempt to draw up a new constitution, in a process agreed following social unrest in late 2019, was rejected in a referendum on Septembe...

Can rare earth elements be a unique opportunity for Chile?