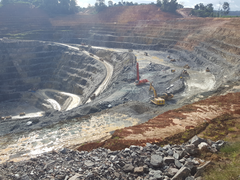 Latin America’s gold mining space is well placed for a pick-up in M&A activity despite potential barriers posed by COVID-19 and high metal prices, according to analysts.

Deals targeting Latin American assets have slowed in 2020, in part as a result in difficulties completing due diligence under pandemic-related travel restrictions.

BNamericas lists seven significant deals, details of which can be seen here, which were completed or advanced in H1 worth a combined US$2bn, including five gold-focused transactions, with few if any significant transactions since July.

The largest were Zijin Mining’s US$1bn and Cdn$323mn acquisitions of Continental Gold and Guyana Goldfields, respectively, targeting gold assets in Colombia and Guyana.

In 2019, Latin America saw total mining deals worth US$14bn conclude or progress, with the figure dominated by Newmont’s US$10bn takeover of Goldcorp.

DEALS IN THE WORKS

But despite the slowdown from 2019, deals are in the works.

“We are still in the process in which we’re seeing some moves at the top, with some assets being hived off into the mid-caps,” Colin Hamilton, BMO Capital Markets managing director, commodities research, told BNamericas.

“You’re seeing a lot of activity in the mid-cap space at the moment and it tends to flow down the chain.”

Activity is being driven by a focus on optimizing portfolios, with some companies trying to exit certain jurisdictions or reduce the complexity of operations, according to Hamilton.

But higher prices may put a dampener on deals.

Gold has surged amid economic stimulus packages by governments globally in the wake of the COVID-19 pandemic, with prices surpassing US$2,000/oz for the first time in August, and currently in the US$1,800-1,900/oz band.

“Most companies have pretty good balance sheets, so... you don’t have distressed sellers, or alternatively you don’t have the need to merge to reduce costs,” Joe Bormann, Fitch Ratings managing director, Latin America corporates, told BNamericas.

But despite this, further M&A activity in the sector is likely.

“It’s always interesting to see what goes through in terms of transactions and the implied prices of gold, and obviously that can be a barrier at the prices we are at today, but on the whole there is potential for further consolidation in the gold industry,” Hamilton said.

The easing of pandemic-related travel restrictions, when it comes, is also expected to deliver a surge in deals getting over the line globally.

“Face-to-face meetings are much harder, and that is still a key part of the process, plus getting people to the sites to do due diligence has certainly been more challenging,” according to Hamilton.

“That is a fair point and you could see it pick up as things normalize.”

Latin America is likely to remain a key area of M&A focus, especially for US and Canada-based companies, Hamilton says.

“It’s in the same time zones, which is often helpful, and they [North American companies] often want to expand their Latin American presence.”

The region is also viewed as one of the safer and more established places for mining, especially compared to West Africa or Southeast Asia, Hamilton adds.

Globally, deals will continue to be done as smaller producers and juniors keep seeking new projects and to be acquired by larger companies, according to Bormann.

“The larger companies are making a lot of money at current gold prices so there is definitely activity happening in the space,” he added.

Copper Mark sustainability initiative to start pilot for other metals

A pilot to apply the initiative's sustainability criteria to molybdenum, nickel and zinc operations will start in November.

According to the CEO of local natural resource company PRC, all permits are in order, allowing swift production start-up as soon as funds arrive.