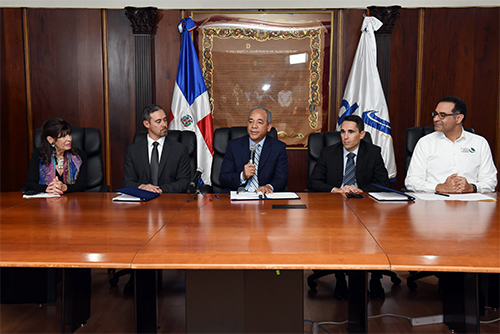 The contracting was carried out through an exclusive procedure by Sole Provider, in accordance with Law 340-06 on Purchases and Contracts for Goods, Services, Works and Concessions.

General Electric will offer technical services for maintenance and optimization of the two generating units of Punta Catalina, as well as operation advice, engineering support, repair services, parts and minor and major inspections of turbogenerators and auxiliary equipment, and It will supply the solutions of the digital industrial software for the optimization of the operation of these equipment.

The signing of the Contract was made during an event held in the Council Chamber of the Dominican Corporation of State Electric Companies (CDEEE), which was attended by the United States ambassador to the country, Robin Bernstein, and was headed by the executive vice president, Rubén Jiménez Bichara, and the General Administrator of CTCP, Jaime Aristy Escuder.

Jiménez Bichara stressed that the fact of hiring the manufacturer of the turbogenerators of Punta Catalina for the maintenance and advice on the operation of the plant is a sign of the interest of the Dominican State to guarantee the useful life of that power plant in time.

The Contract was signed by Jiménez Bichara on behalf of the CDEEE, while Messrs. Christopher Wienbeck and Clauco Antonio Sapia, signed on behalf of General Electric.

Dr. Aristy Escuder offered the details of the Contract, which will last nine years of maintenance services for the two generating units of 376 megawatts each, which will imply a total investment of US $ 19.6 million during the mentioned period. It will also include face-to-face advice of GE personnel in the operation of the aforementioned generation units, which remain under the responsibility of the CDEEE.

Regarding industrial digital software solutions, the general administrator of CTPC said they include a predictive module based on machine learning and artificial intelligence models, asset performance management with health and reliability modules, as well as asset optimization and maintenance. Digital services include constant monitoring from the General Electric Operations Center, located in Atlanta, Georgia.

Since November 2019, Unit 1 of Punta Catalina is operating with an average contribution of 360 megawatts to the National Interconnected Electric System (SENI). While Unit 2, of equal capacity, continues in test operation with a contribution that averages 200 megawatts, although it has already risen above 376 megawatts in maximum load tests. It is estimated that by the month of February 2020, it will provide a stable contribution to SENI.

BNamericas looks at the most important LNG projects in the region that are currently under construction or in an advanced development phase.

A roundup of briefs from Barbados, the Dominican Republic, Honduras and Costa Rica.

Route defined to achieve public lighting in the Dominican Republic