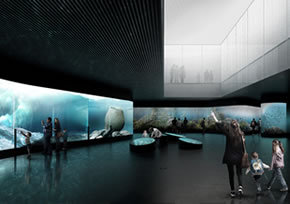 Statement from the Ministry of Public Works

The Regional Government of Magallanes and Chilean Antarctica, the Ministry of Public Works and the Chilean Antarctic Institute announced today the start of the preliminary bidding process to build the International Antarctic Center (CAI) in Punta Arenas, a work valued at more than 80 million dollars that is intended to promote knowledge and dissemination of the white continent along with contributing to the global positioning of the Magellan capital as the main "gateway" to Antarctica.

In today's edition of the Official Gazette, the international call for construction companies to register in a Special Registry of Contractors of the MOP was published, a process that will allow defining the participants in the tender that will begin next July.

The materialization of the CAI will allow Punta Arenas to have first-rate infrastructure both to expose the attractions of the Antarctic territory to the general public and to develop scientific research and conduct academic training, in addition to providing logistical support for future polar expeditions.

The initiative has the technical support of the Ministry of Public Works, which is in charge of the entire bidding process. In this regard, Minister Juan Carlos García stated that “the Magallanes region has been working for years in the development of Antarctic research and in strengthening its strategic position as the closest platform to access the Antarctic continent. For this reason, as a Ministry we are committed to contributing our capacities to ensure that the CAI is not only an emblematic work in urban terms, but also becomes a global milestone that concentrates a large part of the scientific and logistical activity linked to Antarctica. ”.

The project, which considers a budget for the work of $63,925 million to be financed by the Regional Government, contemplates the construction of 32,930 square meters (21,938 m2 of buildings and 10,992 m2 of exterior works) for the authorization of six development areas: downtown of laboratories and research, interactive museum, logistics area, administration building, access area and urbanizations such as parking lots, landscaping and heliport.

Among other facilities, the CAI will have in its research area modern laboratories specialized in matters such as ice, atmosphere and ocean; ecology and evolution; geology, paleontology and paleoclimate; biotechnology; and modeling and bioinformatics. Meanwhile, the interactive sector for visitors will have attractions such as an aquarium, planetarium, Antarctic forest and air-conditioned rooms that replicate the experience of being on the white continent. Added to this is an auditorium for 600 people, a restaurant, cafeteria, bookstore, souvenir shop and an esplanade available for holding events.

Formation of the Special Registry of Contractors

The MOP 's Architecture Directorate today published the call for Chilean and foreign construction companies to register in a Special Registry of Contractors, a process that will allow the selection of companies that meet the necessary conditions to participate in the tender, in terms of financial capacity and experience in carrying out works of this magnitude.

If an offer is received that makes it possible to award the project without the need for reassessment, the works execution contract under a lump sum payment system could begin in the first quarter of 2023 and be extended for a period of 36 months until the year 2026. .

The call for registration in the Special Registry of Contractors is necessary given the fact that the estimated budget for the International Antarctic Center greatly exceeds the upper limit set for those who make up the first category of the Registry of Major Works of the MOP in the specialty of architecture .

The documents can be viewed here.

The two contracts have a total price tag of US$33mn and will benefit the Arica y Parinacota and Atacama regions.

The three contracts entail total investment of US$58mn and contemplate works such as widening, upgrades and bridge replacements.