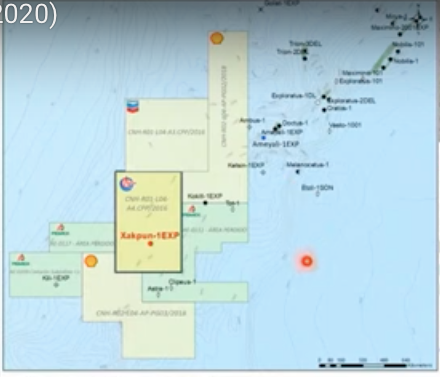 “The [geological] provinces are the Cinturón Plegado Perdido and the Cuenca Salina del Bravo,” CNH technical advisor Ricardo Basurto said. The well site “is very close to the limit between them.”

“This geological objective will meet with high-pressure conditions that can reach 13,735psi,” Basurto said.

Drilling the well in a ‘J’ trajectory, CNOOC forecasts it will find light oil of 38-43° API.

The operator estimates Xakpún could contain 993Mboe (million barrels of oil equivalent), with a  geological chance of success of 42%.

To drill the well, CNOOC will use the R-class ultra-deepwater drillship Rowan Renaissance, capable of operating at depths of 3,657m and drilling to total depths of 12,000m.

It is a high potential region, but one that has frustrated operators.

Off to the north-northwest, in years’ past Pemex drilled some unproductive wells in the Cintúron Plegado Perdido. Earlier this year, Total and ExxonMobil relinquished a nearby 3,000km2 block, also in the Cinturón Plegado Perdido, back to CNH.

Should CNOOC find oil, it promises to be a gamechanger.

“The cost tells us of the technical difficulty,” CNH commissioner Néstor Martínez said. 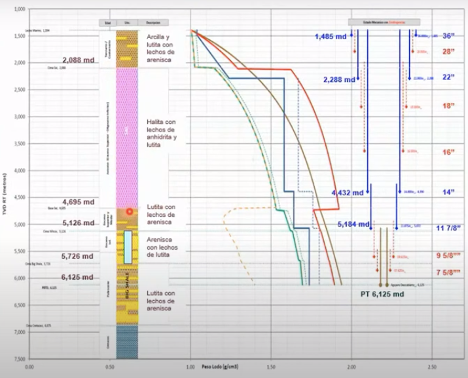 It will be CNOOC’s second deepwater well in Mexico, showing the firm’s continued commitment despite a global capex cut of 11% for 2020, announced in April.

Based on an earlier CNH authorization, part of license assignment CNH-R01-L04-A1.CPP/2016, the operator is currently drilling the Ameyali-1EXP well.

The well is in waters 1,737m deep, with CNOOC expected to reach its objective at a total drilling depth of 6,146m. After a slight delay, drilling of the Amayeli well will extend to mid-July, with termination by July 24.

Then the operator will turn to Xakpún.

CNOOC expects to drill Xakpún from August 10 to October 27 and finish termination on November 5.