Commission learns about project to sell energy to Brazil 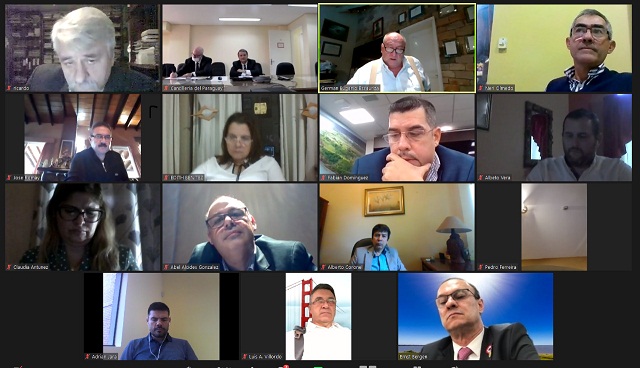 The Special Commission of Binational Entities and Development of the Electric System of the Republic of Paraguay, chaired by Senator Abel González, met on Tuesday through the virtual platform to analyze issues on its agenda.

In addition, Mercosur parliamentarians, Ricardo Canese, Edith Benítez and Nery Olmedo, along with advisers to the commission.

On the occasion, the proposal, given by the Paraguayan authorities, that Ande can sell energy produced to Brazil was debated, because it is energy that Paraguay does not use, and the Argentines make profits, taking into account that Argentina sells to Brazil the energy produced by the EBY hydroelectric plant.

ANDE President Luis Villordo stated that it should be the National Chancellery that indicates whether this sale is convenient, while when asked about this same issue, the Vice Chancellor, José Antonio Dos Santos, asked to be excused from commenting on this point. because it would be very irresponsible to express a particular position.

Finally, it was resolved to request a report from ANDE on this point.

The Commission also debated the Draft Law "That integrates the budget of the Binational Entities Itaipu and Yacyreta - Paraguayan side to the General Budget of the Nation and adopts the positive national law for the administrative operation of both entities."

The Minister of Finance, Benigno López, participated in the analysis of this project, who explained that the PGN has a treatment of Constitutional terms, and proposed to analyze it better later.

"It was an issue that was expressed in the press and then the President of the Republic asked to raise it with Brazil, and I did it, but only informally, but I see it as difficult to achieve, since this is a treaty that must be studied by Law in both countries, ”said Minister López.

The commission's advisor, Pedro Ferreira, mentioned that the funds of the FONACIDE and the Excellence Fund are integrated into the PGN, and that in this way the social expenses of the Binational entities can be entered into the PGN to have control of everything that is tendered and built.

Senator Abel González, finally, expressed that in a session where the discussion on this topic will be raised, he will request to modify articles 2 and 3 of the legislative proposal.

The modifications to be proposed include empowering the Executive Branch to form a technical team so that, within 30 calendar days, it submits to the National Congress a draft revision of the treaties of the Binational entities Itaipú and Yacyretá, once approved by the National Congress to elevate the High Parties.

Another modification is to empower the Executive Power, invoking the condition of partner of the Binational Entities Itaipú and Yacyretá so that the funds of the binationals are withdrawn by our country to incorporate into the PGN.

ANDE and the company ATOME Paraguay sign a service provision contract for 60 MW.

Want to read more information about Commission learns about project to sell energy to Brazil?