On February 23, 2021, EP Petroecuador and the Ecuadorian Biofuels Association (APALE) signed a new contract for the supply of 113,575,238 liters of anhydrous ethanol fuel for the production of Ecopaís gasoline, tasks that will be in charge of the national companies: Codana, Soderal and Producargo.

The General Manager of EP Petroecuador, Gonzalo Maldonado, announced that through this contract the public oil company will invest USD 96,477,364.20 and that it will have a term of execution of 480 days. “ From the company we are contributing to the development of the country's agricultural sector, also incorporating artisan producers. For this reason, 4% of the total they produce will be purchased from them, this means that 4,543,009.52 liters will be purchased, which will benefit small alcohol producers and associated sugarcane growers throughout the process, "he said. .

Currently, EP Petroecuador carries out the distribution and commercialization of Ecopaís in the provinces of: Esmeraldas, Manabí, Santa Elena, Guayas, Los Ríos, Bolívar, Cañar, Azuay, El Oro, Loja, Zamora Chinchipe and Morona Santiago, with a coverage of more 50% of the national territory .

In 2015, through Executive Decree 675, it was established that the distribution and commercialization of Ecopaís gasoline be applied progressively throughout the Ecuadorian territory, depending on the supply of anhydrous bioethanol, fuel grade and national production. This biofuel is expected to replace the demand for Extra gasoline .

Eng. Alberto López, President of the Milagro Sugar Cane Producers Association highlighted that “ With the signing of the contract we achieved the first step towards sustainability of sugar cane production, we depend on this activity directly and indirectly, saving currencies for the State, benefit for the environment, clean renewable energy friendly for the environment. Petroecuador officials are capable of bringing the mixture to 5% and why not in the future to 10%, in Petroecuador there is the capacity to have greater production and national coverage to reach 100% ” .

On the other hand, the President of the Ecuadorian Biofuels Association, Gustavo Heinert mentioned that “The national biofuels plan was a call from the Government for a change in the productive matrix, we started covering the province of Guayas, the volume has increased from 40 million liters to 113 million liters per year approximately. The artisan sector has grown, 1,060 low-income families are helped and the amount of sugarcane that is destined today has grown to 21,700 hectares, 4,000 jobs for the country ” .

Extra gasoline with Ethanol is composed of naphtha and anhydrous alcohol (the latter of national production). The INEN 935 standard for oxygenate content allows up to 10% ethanol in gasoline. 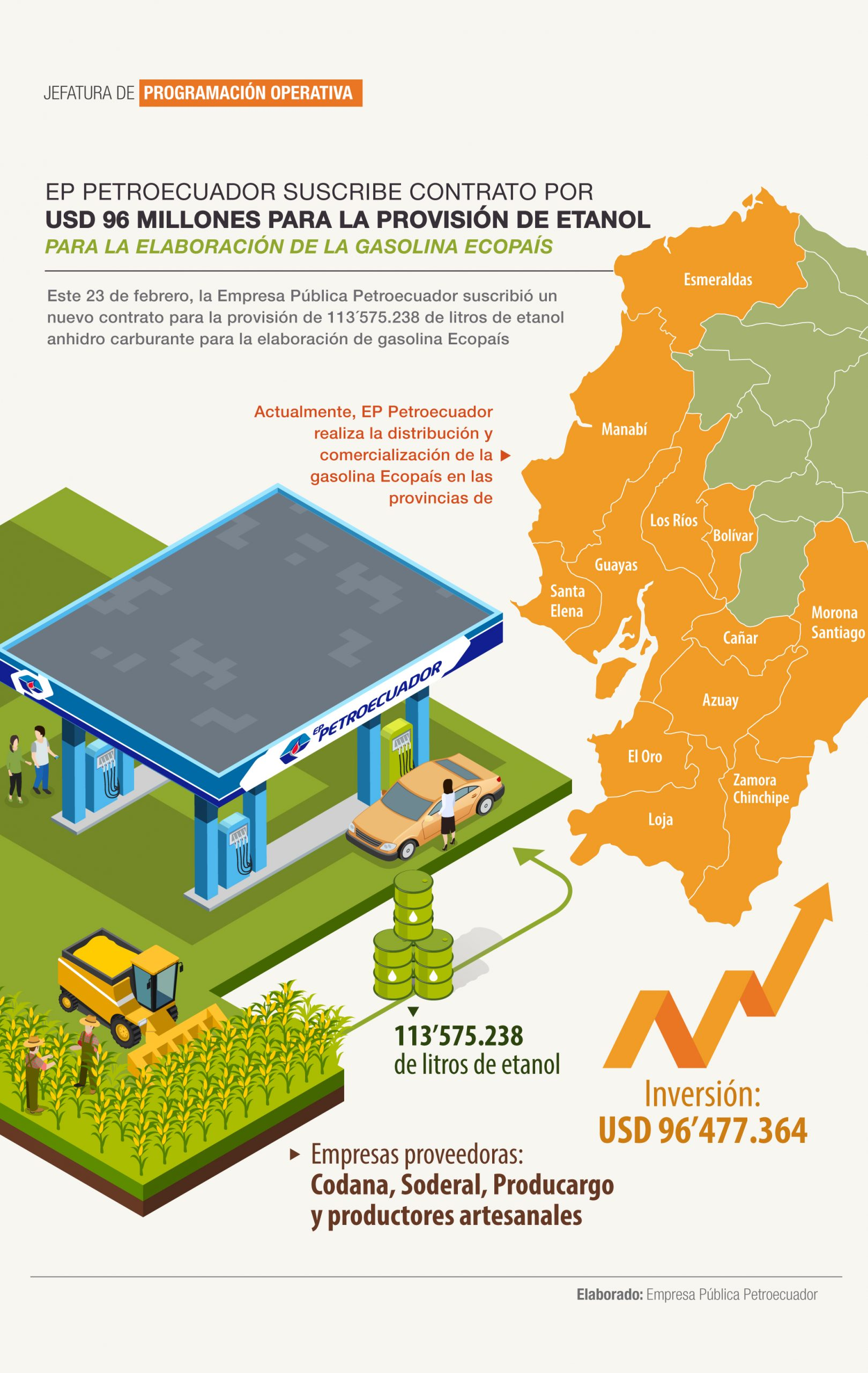 The country’s demand for derivatives in January-November rose 8.3%.

Ecuador: Operation of the Intracampos I Round Blocks contributes more than 5,000 barrels of crude per day to nation...

Official Statement on completion of contracts for blocks 16 and 67

Ecuador designs a roadmap for the production and use of green hydrogen with the aim of advancing towards the energy...

Want to read more information about EP Petroecuador signed a contract for USD 96 million for the provision of ethanol for the production of gasoline Ecopaís?