President of the Republic appoints head of SICT 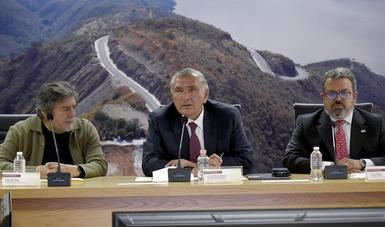 Statement from the Secretariat of Infrastructure, Communications and Transport (SICT)

Mexico City, September 7, 2022.- On the instructions of the President of the Republic, Andrés Manuel López Obrador, the Secretary of the Interior, Adán Augusto López Hernández, presented Jorge Nuño Lara as head of the office of the Secretariat of Infrastructure, Communications and Transportation (SICT).

The foregoing, by virtue of the fact that the head of this dependency, Jorge Arganis Díaz Leal, will be temporarily absent for health reasons.

Secretary López Hernández went to the SICT facilities to notify the decision of the head of the federal Executive to heads of undersecretaries, general directorates and heads of decentralized organizations

He stressed that the new person in charge of the office has worked for a time in the SICT and now receives the responsibilities of the agency.

“We ask for all the collaboration and support for him and we thank him for what he has been doing. In addition, we wish engineer Jorge Arganis a speedy recovery, who will surely rejoin us in the shortest time possible.”

He has a degree in Economics from the Autonomous Technological Institute of Mexico (ITAM). Extensive experience in administration, preparation and start-up of infrastructure projects in the communications, transportation, environment, energy and health sectors, as well as regulation applicable to investment programs and projects in the federal public administration.

Since April 1, 2021, he has served as Undersecretary of Infrastructure at SICT.

During the current administration, he served as head of the Investment Unit in the Undersecretary of Expenditures of the Ministry of Finance and Public Credit (SHCP) until March 31, 2021. Among other activities, the management of the portfolio of programs and projects stands out. investment in economic, social and governmental infrastructure financed with public resources.

He collaborated as director of Hydrocarbon Projects in the Investment Unit of the SHCP (2009-2013).

He worked as deputy director and later area director in the General Directorate of Information and Energy Studies of the Ministry of Energy (2001-2009).

At the National Institute of Statistics and Geography (Inegi) he was head of department, and then deputy director of Analysis of Economic Time Series in the General Directorate of National Accounting, Socioeconomic Studies and Prices (2000-2001).

Gene Towle, managing partner at Softec and real estate expert, told BNamericas why the industrial parks planned for the Tehuantepec isthmus are not...

Want to read more information about President of the Republic appoints head of SICT?