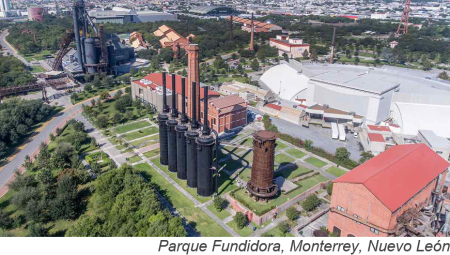 The complex will  include a convention center and a hotel and at its core is a national stadium with space for 80,000 spectators for sports such as football and baseball. It will also feature cultural activities.

Although it has been proposed twice already, works never materialized. But last November the project reemerged in the first stage of the 2020-24 national infrastructure program (PNI), meaning it will be financed by private players and counts with government support.

Details, however, remained scarce as the companies behind the infrastructure were revealed only later by daily El Sol de México, which obtained official documents.

Works for the Estadio Nacional de México will begin this year and finish the next. It will be built near Monterrey’s popular Fundidora park and create some 2,500 jobs directly and almost 6,000 indirectly, according to local media.

The daily also wrote that Esparza Castillo and his three brothers created Íconos Sustentables in July 2014 to promote sustainable projects for parks, stadiums, theaters and others facilities, but BNamericas could not find any public records that proved the existence of Íconos Sustentables.

Yet, the investors participated in the modernization of London's Wembley Stadium in 2007 and Brazil’s Arena das Dunas Natal in 2014 and the construction of Nuevo León’s BBVA Bancomer stadium, according to reports.

Under the original plan, proposed in 2008, investment was estimated at 3bn pesos and works should have been finished in 2011. The complex would be for matches of three first-league soccer teams in Nuevo León state.

A new proposal emerged in 2016, but negotiations between sports clubs and investors failed.

This time, the context is more optimistic as the government promised to support investors and ease legal processes.

The highest constitutional court in Bolivia, the country with jurisdiction over the arbitration, ruled in favor of GCC in this matter.