The Public Company Petroecuador informs the public that due to the sinkhole produced, due to natural causes, on the night of this Tuesday, April 7, in the San Rafael sector (border between the provinces of Napo and Sucumbíos), the breakage of the pipes of the Trans-Ecuadorian Pipeline System (SOTE), the private Heavy Crude Oil Pipeline (OCP) Ecuador and the Shushufindi - Quito Pipeline, which generated a hydrocarbon spill in the Coca River.

Following this event, the following actions have been taken:

1. Once the alert was given, technicians from the companies activated the contingency plan for these eventualities and in this way, minimize the impact on the communities surrounding the Coca River and start environmental remediation work.

2. Six work teams from different areas of the public company, together with personnel from the private company OCP Ecuador, are in the area working to contain the spill.

3. Barriers were placed to control the fluid and prevent the crude from reaching the intake point of the drinking water system of the city of El Coca, which as a precaution was suspended on Tuesday night.

4. Likewise, barriers were placed at the entrance to the Limoncocha Lagoon. This Amazonian city has two catchment systems: one from the Coca river and another from the Payamino river, the latter's waters are completely clean; For this reason, EP Petroecuador, together with personnel from the municipal GAD, will enable the alternate aqueduct of the River (built in 2013 by the public oil company) to restore the supply of drinking water to the community.

5. The companies undertake, if necessary, to supply water to the affected communities, while the repairs last.

6. EP Petroecuador and OCP Ecuador also coordinate the immediate application of clean-up actions on the banks of the Quijos and El Coca rivers.

7. Petroamazonas EP has collaborated in the emergency of SOTE and OCP Ecuador with the loan of equipment to the Municipality of El Coca, in order to solve the pumping of water for the supply system to the city from the catchment of the Payamino river.

The National Government and the private company ratify the commitment to work in the effective attention to the communities affected by this event. 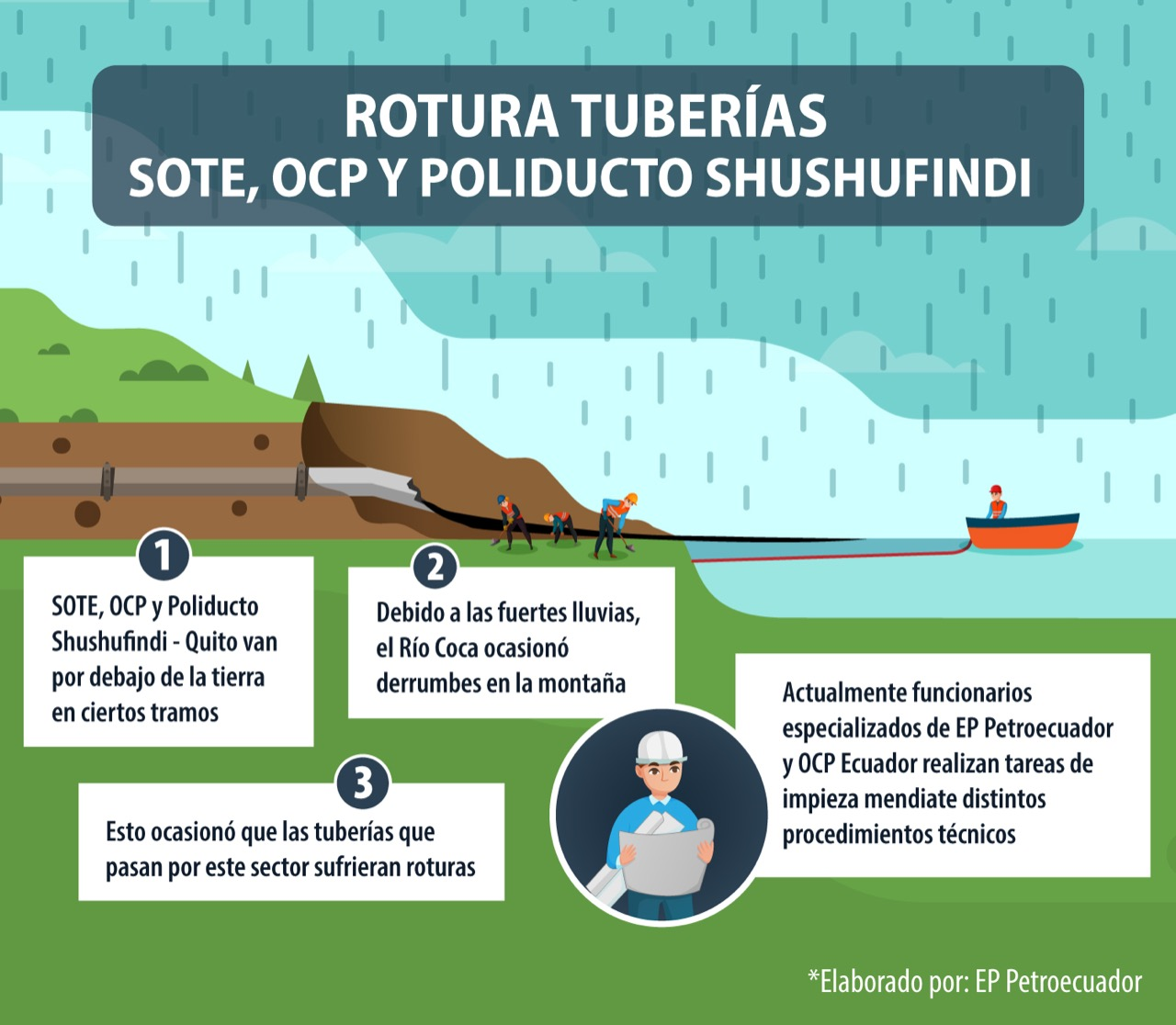 The Esmeraldas-Santo Domingo duct was the country's principal mover of derivatives in the first seven months.

EP Petroecuador has dispatched 90,836 gallons of Ecoplus 89 with pilot plan

Since the start of the pilot plan, EP Petroecuador has dispatched 90,836 gallons of Ecoplus 89.

Want to read more information about Six work teams from EP Petroecuador and OCP Ecuador carry out actions to contain the damage caused by a sinkhole that caused a pipeline break?