Uruguay heads to the ballot box with no clear outlook 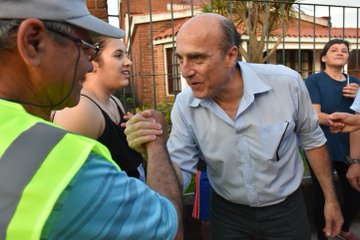 It still remains unclear who will be the next president of Uruguay as the candidates vie for votes before the October 27 presidential election.

“It all indicates that no party is going to surpass the 50%” vote threshold to win outright in the election, Antonio Cardarello, political sciences professor at the Universidad de la República de Uruguay, told BNamericas.

That means there will likely be a runoff and it is not yet known whether opposition parties will unite against the center-left Frente Amplio government.

As of October 9, former Montevideo governor Daniel Martínez (pictured), of the ruling center-left Frente Amplio party, was leading the race with a forecast 38% of votes, followed by Luis Alberto Lacalle Pou of the opposition center-right Partido Nacional with 27%, according to the latest poll from consulting firm Factum.

Back in third place is Colorado Party representative Ernesto Talvi (16%) and in fourth Guido Manini (10%) of the newly formed Cabildo Abierto party.

Cardarello says that the main opposition parties with representation in congress (Nacional, Colorado and Independiente), aim to form a coalition for the probable runoff vote.

“The main problem is that Cabildo Abierto hasn’t stated whether it intends to participate in a coalition government,” the academic stated. “We’ll have to see if the transfer of that vote to other candidates in an eventual second round against Martinez is automatic.”

On the subject of economic policy, one of the main talking points has been tackling the fiscal deficit, which is currently at 4.8% of GDP.

Martínez said on Twitter this week that he would slash the deficit to 2% of GDP without affecting social policies.

Meanwhile, Lacalle said last month that “it is totally inconvenient and unnecessary to adjust [the deficit] through tariffs and taxes, since it would mostly affect small and medium-sized companies,” he was cited as saying by daily Cronista.

Instead, opposition parties are calling for a limit on the number of public employees, instead of fiscal austerity that would undercut social programs, Carderello told BNamericas.

Despite this, he adds that all parties agree that a pension reform will be necessary, but that in this area Lacalle could run into a major roadblock with the Cabildo Abierto party.

“One of the biggest, if not the biggest deficit, is the one from the military pension funds,” he explains. And since Cabildo Abierto’s candidate Guido Mani is a former [army] commander, it is likely that the party will see military pensions as a red line when negotiating a reform.

Another divergence is that while all parties acknowledge the Mercosur-EU trade deal as positive, opposition parties are more likely to seek unilateral trade deals, but without exiting the trade bloc, Cardarello says.

The presidents of both countries suggested a common currency would help spur trade, but market analysts see major issues with the idea.

Want to read more information about Uruguay heads to the ballot box with no clear outlook?