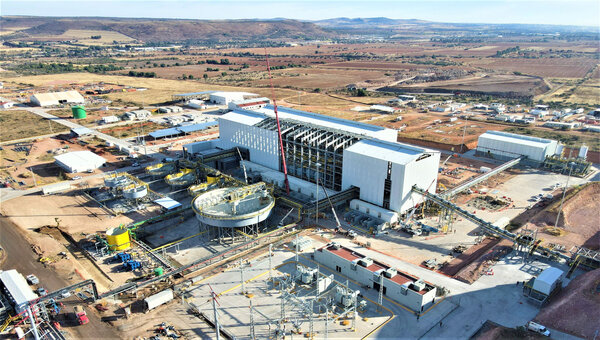 The timelines of at least six projects have slipped in recent months, as a result of factors including delayed grid tie-ins and financing, along with a general lack of progress to date.

Mexico, Latin America’s top gold and silver producer, hosts around 24 mining projects for which estimated start dates, capex and production have been released, according to information compiled by BNamericas.

All are due to begin production by end-2028.

The list has shrunk from 26 worth US$9.08bn in November, due to one project entering production and an estimated production start date being withdrawn for a second asset. 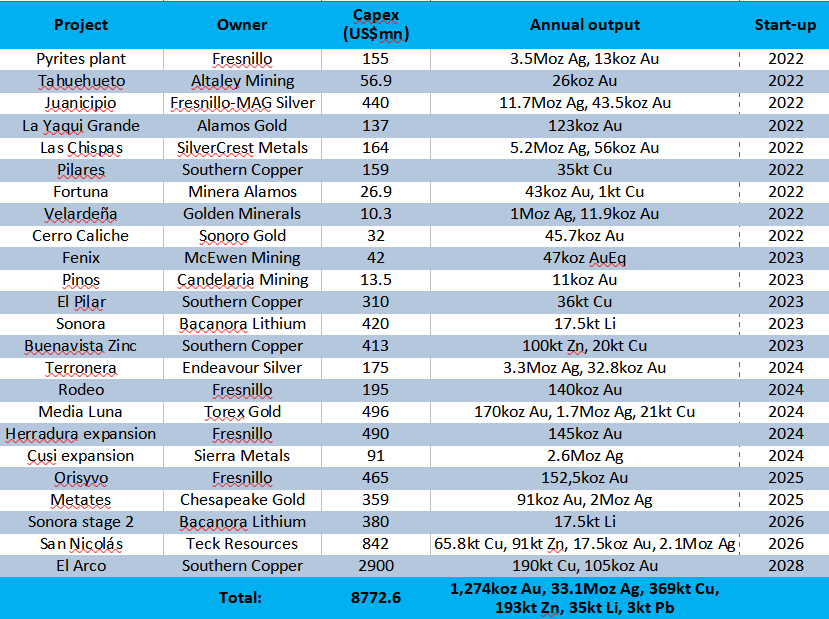 First production at two of Fresnillo’s projects has been pushed back in recent months, due to delays in their tie-ins to the electricity grid by state power company CFE, in part due to COVID-19 challenges.

The tie-ins are now forecast around mid-2022 for each project. Fresnillo had targeted completion of both investments by end-2021.

Construction is also ongoing at Altaley Mining’s Tahuehueto project, which had been scheduled for end-2021.

The company expects to conclude construction soon, ahead of a ramp up to full production in Q2-Q3, it said earlier in March.

The project metrics were also updated in a March pre-feasibility study, which estimated initial capex of US$56.9mn and production of around 26,000oz/y gold, along with silver, lead, zinc and copper byproducts.

The figures compare to around US$20mn and 16,000oz/y gold previously.

The company is continuing to advance strategic options for Fenix, which involves merging its El Gallo and El Gallo 2 properties, including a potential sale, while financing and permitting are also advancing, COO Peter Mah told the Q4 earnings call.

“While project financing is moving more slowly than expected, the project continues to move forward and with the receipt of financing and board approval in the next couple of months, is still expected to complete commissioning in 1H24,” CEO Dan Dickson said in a release in March.

Orla Mining’s US$134mn Camino Rojo gold mine dropped from the list after the company began production on time in late 2021.

The company has developed the Guadalupe open pit and Bermejal underground deposits, which formed components of the US$213mn expansion project, but has postponed construction of a proposed carbon-in-leach (CIL) plant, the final element of the expansion.

The company is now looking to develop the CIL plant after advancing its Greenstone project in Canada, which would involve a significant delay.

“At the moment, I think it’s best to plan for about two years from now,” CEO Christian Milau told the Q4 earnings call.

But many of Mexico’s main mining projects are advancing on schedule.

Southern Copper is also due to begin production at its US$159mn Pilares copper project this year, with the US$310mn El Pilar and US$413mn Buenavista Zinc assets coming on stream in 2023.

Fresnillo continues to target first production at its US$195mn Rodeo and US$465mn Orisyvo gold projects in 2024 and 2025, respectively.

No changes in timing or metrics have been reported for Teck Resources’ US$842mn San Nicolás primary copper asset or Chesapeake Gold’s US$359mn Metates gold development, or for Bacanora Lithium and Ganfeng Lithium’s US$420mn Sonora lithium carbonate project, although it is unclear whether the latter will begin production as forecast in 2023.

Torex Gold expects to complete a feasibility study for its US$496mn Media Luna gold-copper project by end-Q1, which could include changes to its capex and production metrics.

First production is expected in 2024.

At the accumulated level, however, a contraction of 8.1% was registered compared to the year 2021.