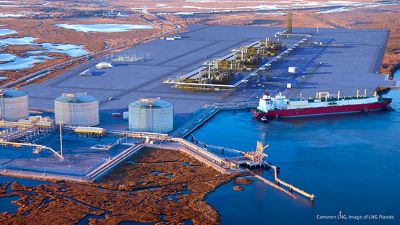 Despite uncertainties affecting the midstream sector, Mexico has a rich portfolio of LNG export projects that are being evaluated by both public and private players.

The largest projects in the pipeline are two new LNG liquefaction terminals, Energía Costa Azul, which is under construction and expected to come online in late 2024, and the Amigo LNG project, where construction is due to start this year and finish in 2027. Each project has a budget of US$2bn.

Northern Mexico’s proximity to cheap US shale gas, available natural gas transport capacity via existing pipelines, and access to both the Pacific and Atlantic oceans, make the area attractive for exports to Asia, Europe and the rest of Latin America.

Below are the four large-scale projects under evaluation, as well as a unit already under construction.

The project seeks to make use of existing pipeline infrastructure to import shale gas from the United States and convert it into LNG for export through a large-scale facility involving 400,000m3 of gas storage capacity as well as two liquefaction barges with capacity to process 7.8Mt/y (million tons per year) or 379Bf3/y (billion cubic feet per year).

The project has made recent strides in its permitting process, getting approval by Mexican regulators, as well as earlier authorizations by US authorities to import 395Bf3/y of natural gas to supply the project.

The firm also selected an EPC contractor “with extensive experience in LNG assets,” although it declined to disclose the name of the company.

The last hurdle comes in the form of construction permits, which are expected to allow the company to begin buildout this year.

This Sinaloa state project, helmed by Sempra Infrastructure, involves construction of a new liquefaction facility in the port of Topolobampo.

The project, known as Vista Pacífico LNG, would be developed as a joint venture with federal power company CFE, which looks to strengthen its position in the LNG industry after its successful foray into US gas trading through subsidiary CFE International.

While details of the project are lacking, Sempra has said it would export approximately 4Mt/y once built.

This project led by Mexico Pacific involves the construction of a 14.1Mt/y terminal in the port of Puerto Libertad, Sonora state.

It would be built in three stages, each bringing one liquefaction unit with 4.7Mt/y capacity and some 600Bf3/d of gas consumption online.

The project’s Pacific Coast location allows it to skip the Panama Canal and target exports to Asia, where it will seek to leverage the low natural gas prices of the Permian and San Juan basins in the US, utilizing existing pipelines.

The firm has stated it has obtained all major permits required to operate the project. Mexico Pacific is expected to make a final investment decision this year to start operations in 2025.

CFE also has plans to build a 3Mt/y liquefaction unit in the port of Salina Cruz as part of its plans to expand natural gas infrastructure in the Tehuantepec isthmus.

The project, for which CFE has estimated investment of around US$1.3bn, was included in infrastructure program PNI in 2020 and will be put out to tender this year, according to the company, together with a package of pipeline projects meant to increase isthmus capacity.

The terminal would have liquefaction capacity of 200Mf3/d with the option to double output in future.

The only LNG plant currently under construction in Mexico is IENova’s (now Sempra LNG) flagship project in Baja California state, with France’s Technip appointed as the main contractor.

The project involves a 3.25Mt/y or 450Bf3/d liquefaction plant at Sempra’s existing LNG import facility in Ensenada. Of the total, 2.5Mt/y of production have already been committed to Mitsui and Total through 20-year supply contracts.