Spotlight: The spillover effects of the Russia-Ukraine war on the ICT sector 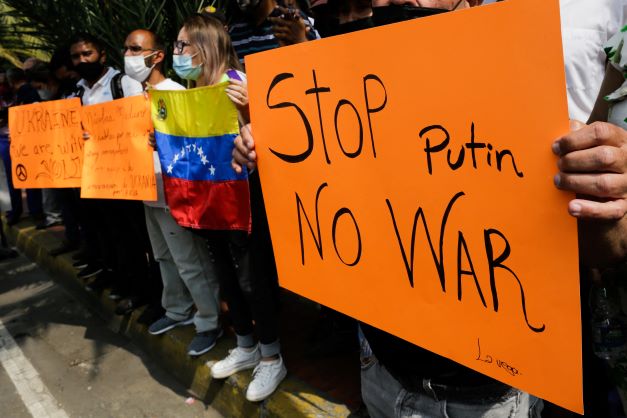 With Russia being subjected to more economic sanctions following its invasion of Ukraine, with mounting international financial measures and boycotts by increasing numbers of companies, various sectors besides energy and commodities are also tightening their belts ahead of the expected impacts.

That is the case of the technology and telecommunications industries in Latin America, which are not expected to escape the ripples of the war.

In addition to high inflation and widespread economic slowdown, analysts estimate that the crisis will add new pressure to the already-stressed chipset and semiconductor industry, which is still struggling to keep up with post-pandemic demand.

Supplies of palladium, a key metal for memories and sensors, is one of the most critical issues for the industry, a high-ranking executive from a US multinational telecom infrastructure company with operations in Latin America told BNamericas, requesting anonymity.

This source also reported being concerned with the as-yet unclear extension of sanctions and how they could affect groups operating in different countries and with commercial ties to Russia.

Both Russia and Ukraine provide crucial raw materials for the production of semiconductors. Ukraine supplies global semiconductor manufacturers in different countries with critical neon gas used in the production of these devices, while Russia is a major palladium exporter. It is estimated that about 35% of the metal comes from that country.

The lack of access to materials from both countries is likely to add new pressure to prices of cellphones, datacenter components, videogames, televisions, appliances and vehicles, among many other products.

In a report released on Friday, S&P Global Ratings echoed those concerns.

The ratings agency said that the geopolitical shock of the invasion could prompt sustained inflationary pressures across many countries, partly due to higher metals prices, notably aluminum. Analysts already expect the conflict to demonstrably impact world aluminum supply and prices, according to S&P Global Commodity Insight.

Prior to the invasion, the White House had already urged US chipmakers, such as Intel and Qualcomm, to find alternative suppliers, Reuters reported.

On the other hand, Intel and AMD joined ARM and TSMC on the list of semiconductor-related companies that have cut ties with Russia and will not be exporting various components to the country indefinitely, mostly due to the sanctions imposed by the US government.

On Friday, Fitch Ratings warned in a report about the risk of spillover cyberattacks against "non-primary targets" becoming much more widespread following the attack on Ukraine.

“Heightened risk exists particularly for issuers conducting business in these countries or with their governments, as well as for entities or countries that impose sanctions or deemed to interfere,” Fitch Ratings said.

The understanding is that the war amplifies the broader trend of increased volume, size and sophistication of attacks, with corresponding significant financial, reputational and legal risks to companies. Potential targets include critical infrastructure such as financial services, governments and utilities.

According to Fitch, the 2017 NotPetya cyberattack underscores the spillover risk to entities outside Ukraine.

“That attack initially targeted Ukrainian government and financial entities but ultimately affected computer systems across the globe, costing billions of dollars in damages.”

At the start of the invasion, the US Cybersecurity and Infrastructure Security Agency encouraged companies and organizations to ensure the protection of "their most critical digital assets."

And although companies in Latin American countries might not be immediate targets for cyberattacks as Russian retaliation, for example, the generalization of these events increases risks for corporates from and in the region.

In recent days, following the imposition of sanctions on Russia, some of the main cryptocurrencies that had suffered drops were bouncing back, such as bitcoin.

Bitcoin passed the US$44,000 mark on the morning of March 3, according to CryptoRanke, after having dropped as low as US$34,000 in the first days of the invasion.

According to Felipe Veloso, economist, and founder of Brazilian crypto exchange Cripto Mestre, as soon as the war broke out, investors took money from risky assets, such as cryptocurrencies, to protect their wealth.

But after tougher economic sanctions and Russia being blocked from the Swift international payment system, the tide turned.

“There was already speculation about migration of Russian capital to cryptocurrencies. And it happened. Russians can't buy dollars, but can, for example, buy stablecoins," Veloso said in a statement.

Tasso Lago, a private cryptocurrency fund manager and founder of Financial Move, said that the appreciation of bitcoin came as people tried to protect their capital from the strong depreciation of the Russian ruble.

"The goal of bitcoin and other cryptos is for people to own their own money without intermediaries. This strengthens cryptocurrencies even more. That's why I see bitcoin getting stronger and stronger in this scenario," he said in a release.

Meanwhile, Russian space agency Roscosmos has withdrawn from the French Space Center in Korou, Guiana following the sanctions imposed by the European Union.

French company Arianespace also indefinitely suspended upcoming launches in partnership with the Russians from the Baikonur space center in Kazakhstan, including the next mission for the broadband satellite company OneWeb, which was scheduled to take off on a Soyuz rocket from Baikonur.

Ultimately, this could delay plans to expand and complement satellite connectivity to remote areas in Latin America through OneWeb's systems. To date, OneWeb has already launched two thirds of its constellation, with 428 satellites now in orbit. The remaining launches were due to take place this year.

Low-Earth orbit (LEO) satellites such as those from OneWeb, SpaceX and others, and middle-Earth orbit (MEO) satellites from firms like O3B, have been increasingly adopted in Latin America due to their capabilities for data transmission to and from remote areas.

Telespazio, a joint venture between Leonardo (67%) and Thales (33%), through the subsidiary Telespazio Brasil, recently announced the construction of a satellite gateway at the Maricá teleport in Rio de Janeiro state.

“OneWeb's constellation of 648 satellites will supply high-speed internet and low-latency, high-security communications for government institutions, defense, and the Oil & Gas, shipping and aviation industries, as well as mobile telephone companies bringing 3G, 4G and 5G to all parts of Brazil,” the company said about the Maricá teleport.

Likewise, the Colombian ICT ministry pointed out that OneWeb suggested the possibility of building a satellite teleport in Valle del Cauca department.

On the global tech front, recent reactions include Accenture saying it was discontinuing its operations in Russia, while Google followed Apple's lead and announced the suspension of all online advertising in Russia. The list continues to grow.

Uruguay's state-run telco Antel, for its part, announced it was cutting off Russian news channel RT from its transmission network Vera TV, claiming that the outlet broadcasts "propaganda" and "is justifying" the war. The Uruguayan move has sparked a domestic debate about the freedom to access information and censorship.

In the software area, Oracle has closed its Russian offices, while German software giant SAP announced it was pausing all sales of SAP services and products in the country.

"We are stopping business in Russia aligned with sanctions and, in addition, pausing all sales of SAP services and products in Russia," wrote SAP CEO Christian Klein.

Ukraine has a strong IT sector, especially nearshore services and professional services, employing around 200,000 professionals, most of them in development centers aimed at serving markets elsewhere.

Brazil’s IT multinational Stefanini, which has operations in Ukraine, has transferred staff to neighboring countries.

Stefanini launched operations in Ukraine in 2019. When the invasion took place, it employed 30 people in the country. A third of them expressed interest in moving abroad through convoys arranged by the group, a company spokesperson told BNamericas.

Stefanini has assured that the provision of services to customers remains normal, as they can be provided by teams located in other countries.

“In addition to all the work to ensure the safety of employees, we put together a contingency plan to maintain the services and quality of service to our customers, as we did at the beginning of the pandemic,” Marco Stefanini, the company’s founder and global CEO, said in a statement.

In Eastern Europe, Stefanini also has offices in Moldova and Romania.

In Moldova, which borders Ukraine, Stefanini employs 250 professionals, half of which have expressed intentions to leave the country, according to the company. This process is already underway and is expected to conclude this week. The priority is to accommodate them in Romania.

In a letter sent to regional clients earlier this week, to which BNamericas had access, Stefanini’s CEO for EMEA, Farlei Khote, said:

“We will continue to monitor the political situation and update business continuity plans accordingly. In addition to leveraging our existing capabilities, we are expanding our global delivery centers towards other locations (South Africa and Bosnia in 2022).”

“We also want to reinforce that our European operations are mainly based in NATO countries. We thus believe that it is very unlikely we will experience any direct consequence of the escalation in Ukraine.”

Khote’s letter to customers also expressed hope that political leaders would de-escalate the situation and concluded: “In the meantime, for matters within our will and control, Stefanini can assure you that we remain fully prepared to support your business without unreasonable or unnecessary disruption.”

The presidents of both countries suggested a common currency would help spur trade, but market analysts see major issues with the idea.

Another Mexican solar project cancelled due to permit issues

Want to read more information about Spotlight: The spillover effects of the Russia-Ukraine war on the ICT sector?