What to do about Mexico's stalled deepwater program? 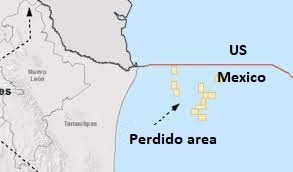 Mexico’s deepwater aspirations in the Perdido area of the Gulf of Mexico might yet be achieved by new midstream infrastructure, according to the author of a new report.

Houston-based energy consultant George Baker and publisher of the Mexico Energy Intelligence (MEI) newsletter says there are at least three options to get stalled production in the Perdido area finally up and running.

“For those license-holders in that area, namely BHP, Chevron, CNOOC, Shell and Pemex, the best 'farm-to-market' – aka, midstream – solution would be an export pipeline to ‘tie back’ … to the Great White hub that is some 70 miles away on the US side,” Baker told BNamericas.

Baker refers to Great White, one of three fields with Tobago and Silvertip in the Perdido area running into the northern side of the division between US and Mexican waters.

“The conundrum facing the pipeline company would be the diameter and flow capacity of the line,” he added. “The greater the prospective volume, the larger the pipeline.”

Baker said a similar issue applies to what he dubs “Plan B, which would be a longer pipeline to a terminal on the Tamaulipas coast.”

A third option, he said, entails an FPSO vessel that could take oil production to market without a pipeline, adding, “I have heard that this solution is under consideration.”

Baker formed the suggestions after an analysis of Mexico’s Perdido area compiled in a special MEI report, with highlights available here.

Block ownership in the Perdido area and the division between US and Mexican waters is as follows, according to S&P Global. 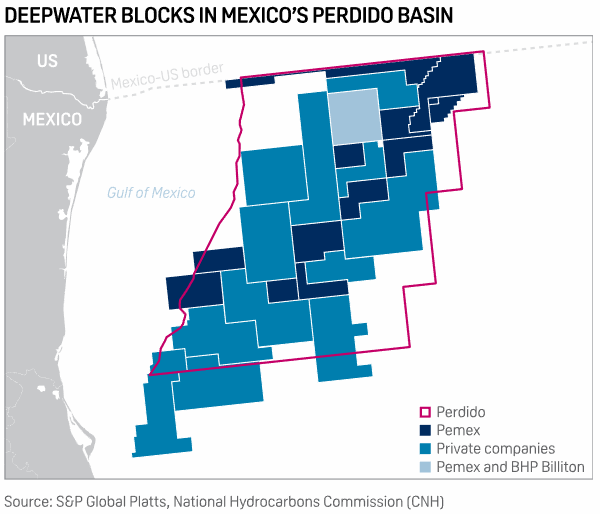 In terms of Perdido’s potential, the report cites a 68-page outline for development of the area compiled by hydrocarbons regulator CNH in May 2012 that breaks it into two sections.

These are the Perdido Fold Belt, which has prospective resources of 8.86Bboe (billion barrels of oil equivalent) and the Subsalt Belt with an estimated 8.44Bboe.

While the plan was approved, it was clear at the time that Pemex would be unable to move on to the next stage of field development, given its limited technical know-how and a workforce that is not experienced in deep-water development.

The 2013-2014 energy reforms sought to resolve the problem by involving private players via equity partnership schemes, though full farm-outs were never approved.

Between 2015 and 2018, the government offered 13 blocks in the Perdido basin to contractors on a per-barrel royalty structure established in the energy reforms.

The country auctioned off 51% of the area under equity partnerships with private firms in rounds 1.4 and 2.4, and the remaining 23% remained unassigned in the hands of the State.

Currently, 22% of the Perdido area is assigned to state oil company Pemex and another 40% belongs to Pemex via a service contract with BHP Billiton at the Trión block.

The following from the MEI report details the evolution of licensing in Perdido.

BHP has yet to bring the block to production. However, the company did report that as of August 5, 2021 it was committing US$258mn to complete the FEED phase, which is where the project still stands.

As noted in the BNamericas project database, Pemex CEO Octavio Romero met with the president of BHP Petroleum, Geraldine Slattery in February 2022, to review the progress and scope of the project in which the companies are partners and agree on what is next for Trión.

Pemex has not provided details of the talks, but Mexican President Andrés Manuel López Obrador (AMLO) has stated on various occasions in the last year that he would like to see progress in the deep-water area.

Baker, in his comments to BNamericas, suggested that other factors are also holding back production in Perdido, mainly tied to Pemex itself, as well as the political ideology of AMLO.

Taking office in December 2018, the president immediately cancelled planned oil rounds and halted any future oil rounds until at least 2023.

No mention has been made of restarting the rounds and, given AMLO’s criticism of existing production-sharing contracts, this seems unlikely to take place before his term ends in October 2024.

“AMLO represents the contracts with private oil companies as licenses to steal what is – again – the ‘property’ of Mexicans,” Baker told BNamericas, “The right word would be stewardship.”

Rooted in the philosophy that saw Mexico expropriate the assets of foreign oil companies in 1938, he said, “The idea that ‘Mexicans own the oil’ is so deeply ingrained in the public psyche that nothing, it seems, could correct it.”

Furthermore, Baker said, mistakes made by the Mexican government while executing the oil rounds generated insufficient impetus for BHP to push harder on production.

Mexico’s finance ministry “was profoundly misguided” in 2015 by proposing that royalties in production-sharing contracts be a biddable variable in determining how blocks were awarded.

To remedy this, Baker suggested “a period of royalty relief or tax holiday” to encourage private firms to accelerate their development programs in Mexican waters.

The MEI report also builds on a study conducted by US think tank Heritage Foundation looking at Pemex as one of 12 large-scale institutions operating around the world.

The study, Baker said, indicates that Pemex’s leadership for the last 30 years has “lacked both the business flexibility to hire from the global market experienced, full-cycle executives and managers for a deepwater product and, until 2016, the legal flexibility to enter into joint ventures with IOCs who had deepwater credentials."

The MEI report states, “The prohibition of global hiring is an institutional artifact, not a legal mandate."

Nevertheless, the report adds, “In the language of the Heritage Foundation [Index of Economic Freedom 2020], Pemex’s labor force – from top to bottom – is ‘repressed’."

Ultimately, to succeed in Perdido, the MEI report concludes, “The economics need to improve to justify the business case” for a new midstream solution.

“Qualified companies need a favorable risk-reward assessment of their situation … The MX government would need to set aside the ownership theatrics in favor of incentivizing development.”

Mexico's supreme court will now have to rule on the energy ministry's orders to make it compulsory to purchase natural gas from only State companies.

Want to read more information about What to do about Mexico's stalled deepwater program??