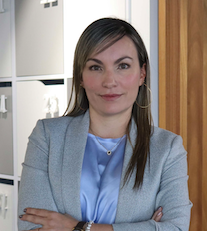 Last year, it started in Peru, and the next objective is Chile. In the medium term, Joyco wants to enter the Dominican Republic too, among others.

CEO Diana Lorena Castaño tells BNamericas about the strategy and why internationalization in the construction sector is crucial.

BNamericas: What’s been your experience working in Colombia’s infrastructure sector?

Castaño: It has been very good. This year we celebrate 44 years working in this and other sectors. We have come across changes of government, a pandemic ... we have seen so-called type specifications, which helped regularize participation in tenders and make them more transparent. We have seen how the public and private sectors have changed and become stronger, in areas as important as infrastructure, among others, strengthening our concessions.

[Colombia] was more than 100 years behind, I would say, with concessions. We were far behind in some segments and received a very interesting push. We have been participants in everything that has evolved in the country.

BNamericas: How many of your projects are public and how many are private?

Castaño: Right now, 74% of our projects are public and the other 26% are private.

BNamericas: And what’s the state of the infrastructure market?

Castaño: It has a lot of potential, although we have a long way to go. There is still a lot to do and we are seeing certain momentum. Many concession plans are very advanced, they have an assigned budget, so it will take years to slow down this momentum.

In addition to new projects, there is good momentum from past administrations since they assigned budgets and awarded projects, and new projects are emerging not only in the branch of infrastructure but in others, too.

What we have managed to read about this administration, because its government plan is not yet very clear, is that it will focus on other types of segments that for us as an engineering company are also very good, and the country needs them, such as health and agricultural projects … and we see them with great potential.

In some sectors, the percentage of participation and budget will be mobilized, but there is still a very large investment in the development of the country.

BNamericas: Is Joyco interested in these social infrastructure projects?

Castaño: That's right, it's our projection. We have it in our strategic plan to focus on providing the same services we have now, but in these segments.

BNamericas: What are your projects in the airport business?

Castaño: We have them as prospects, especially the Cartagena airport and the Café airport, which has been very controversial. It has been going on for 20 years and has never advanced. We have submitted an offer and we are waiting to see what happens with the development and the awards.

BNamericas: Do you have a prospective date for the decisions?

Castaño: No. I would say it’s months [away] still.

BNamericas: Will most companies have to undertake internationalization?

Castaño: I would think so. If a good job is done at the local level, you have to expand at some point if you want to grow. Surely, some companies do not aim at growth; they will stay at a certain level and focus on other pillars, such as increasing profitability or things that interest them more. For us, growth, sustainability, and profitability are pillars, and that makes us want to expand our borders because we are reaching a point where Colombia is too small.

BNamericas: What are the challenges in this expansion?

Castaño: We face many. For us, entering a new country with particular legislation is a challenge. It is a challenge to study it and know how it is being handled, and that is why we wanted strategic alliances in different nations. This is how we have done it in Chile.

We want to do it in Peru hand in hand with allies that have goals and ways of working similar to those of Joyco, with transparency, great expertise, and excellence in quality. That is the challenge: Knowing the country, analyzing the allies so as not to enter alone, not knowing how politics moves and how the whole technical issue moves.

BNamericas: How many international alliances do you have?

Castaño: Right now, we have strong alliances in Chile with companies. But we don't tend to have too many. In Chile and Peru, we have two very strong partners. We are looking for allies.

BNamericas: You don’t have projects in Peru?

Castaño: We are analyzing some with several allies, but nothing has materialized.

BNamericas: Why is the Dominican Republic attractive?

Castaño: We did a market study from different fronts: structural, socio-political, macroeconomic. The whole yielded a very good score, in addition to location. At Joyco, we are judicious in reading the environment or at least trying to analyze these parameters I mentioned, and the Dominican Republic draws our attention because it has a good investment [climate], very interesting projects, and is very well located.

BNamericas: In which sectors did you find the most interesting projects?

Castaño: The two main sectors we would like to enter would be roads and energy.

BNamericas: What does Joyco expect from that market?

Castaño: We hope to participate in the same way as in Colombia, both in the public and private sectors, later having a branch directly in the country, but initially being able to stand out and be recognized like in Colombia.

BNamericas: Are you setting up alliances with local companies?

Castaño: No, the Dominican Republic is in the medium term. First, we focus on Peru and Chile.

BNamericas: What about other countries in the region?

Castaño: Panama is among the ones we initially eyed. We’ve ruled out a few too, mainly due to volume and capacity to enter. The ones we have right now are Peru, Chile, the Dominican Republic and Panama. We do not rule out Venezuela, but we have not yet started the analysis.

BNamericas: Would entering Venezuela be difficult?

Castaño: Could be, but I think it has enormous potential with new governments. It is a country that has been closed for a long time and has many needs, which can be addressed from Colombia.

BNamericas: What should companies planning to expand internationally be aware of?

Castaño: The recommendation is that they carry out a very responsible, very prudent analysis of why they want to internationalize, of their objectives to gauge if their target country would serve them.

As I told you, some companies will aim to grow, others will seek to increase profitability. They should gain allies. The other thing is to be patient. This is a process and you have to do your analysis considering many variables and that is not achieved overnight either.

Want to read more information about How a Colombian infra consultancy is expanding across LatAm?