How Brazil's Bahia state is becoming a mining hub 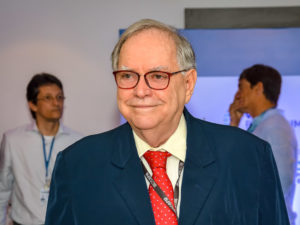 Northeast Brazil’s Bahia state is seeing a steady expansion of the mining industry and the start-up of an important rail line in 2026 is likely to drive the sector even more.

Bahia is expected to attract mining investments of 70bn reais (US$13.7bn) through 2025, consolidating its position as the third largest mining state in Brazil.

BNamericas: What is the current scenario for mining in Bahia?

Tramm: We can say that mining is booming in the state.

About four years ago we were the fifth state in Brazil in terms of mining production, now we are the third.

I know that we’re far from the first places, which are the states of Pará and Minas Gerais, but given the work we do in mining exploration here through a state-owned company, which no other state in Brazil does, it’s not unlikely [we can catch up].

We really think about reaching leadership positions in the future.

BNamericas: What makes you have such an ambitious vision of Bahia's position in relation to mining?

Tramm: Bahia is a large state in territorial extension and has a mineral diversity that perhaps no other region has.

Today I have mapped almost 50 different minerals in the state.

Between 2022 and 2025, Bahia will receive a total of 70bn reais in investments in the mining sector. In 2019 and 2020, 600mn reais were invested in Bahia just in exploration. This is an investment in the mining potential of the future.

[Editor’s note: Bahia is the largest Brazilian producer of barite, bentonite, chromium, diamond, magnesite, quartz, salt and talc. It ranks second and third in nickel and copper and is the only producer of vanadium and uranium in the country.]

BNamericas: How are the logistics in the state to meet this expected growth in mining?

Tramm: We have a very important project underway, which is the Bamin [iron ore mining company Bahia Mineração’s] investment program.

The FIOL railroad is expected to start operating in 2026.

Once this railroad is operational, it will reduce costs for mining companies and make projects more attractive. Currently, Bamin transports its minerals between the mine and the port by truck, which involves high costs.

In addition, FIOL is a railroad that can be used by other companies as well, which will help develop not only mining in the state, but also agriculture.

Through the extension of the FIOL railroad, we have already documented other areas with potential for the production of iron ore and other mining goods.

Today FIOL 1, which is the first stretch of the railway, is already 78% complete. When it’s operational, CFEM [mining royalty] contributions paid by Bamin will be around 600mn reais per year for the state.

Another important element of development to be generated by FIOL is that we’ll likely see several companies interested in building small rail networks to connect their production areas to FIOL. This will happen thanks to the [railways] authorization regime that exists today.

BNamericas: In light of the exploration efforts made by CBPM, do you plan to offer new areas this year?

Tramm: Last year we carried out tenders for the exploration of seven areas in Bahia. We the Brazilian state with the best geological mapping.

We’re now using areo-geophysics for the mapping, which makes it even faster.

For this year I plan to hold six more auctions for new areas, for iron ore and gold, among others.

BNamericas: Recently the federal government launched a program to reduce Brazil's dependence on imported fertilizers. How can the mining sector in Bahia benefit from this?

Tramm: We have very large phosphates areas here in the state, where there is great production potential.

But with regard to these phosphate areas, I need the [country's mining regulator] ANM to clear the processes so that we can offer these areas.

The company Galvani already has significant production of phosphate here in the state, but we have areas with potential for more.

Phosphate is just one more element to show how diversified and how much potential mining has in Bahia.

In the region of the Reconcavo basin we also have potential for the production of potassium. It’s an expensive production process, but it will tend to become feasible as the problems with imports grow.

There are segments of mining that are of national security importance, such as the fertilizer chain, and this needs to see intense exploration efforts by the federal government as well.

BNamericas: Amid the positive results of the mining sector since the beginning of the pandemic, we see pressure for tax increases in some states and also from the national congress. Is there pressure in Bahia, from political leaders, for higher taxes?

What the state of Bahia wants to do is attract investment and production. With more activity, there will automatically be more tax generation, without having to increase the tax burden.

We need more investments in the sector, because this investment brings social development. We shouldn’t penalize companies that invest with more taxes.

Key legislation from the previous government will also be reviewed.

Brazil's wealthiest and most populous state is likely to "act as a laboratory to show the results of a government policy that defends a reduced sta...

Want to read more information about How Brazil's Bahia state is becoming a mining hub?