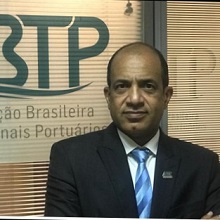 The controversy could impact auctions for the leasing of port terminals, which has become a vibrant segment in recent years.

ABTP president Jesualdo Conceição da Silva talks with BNamericas about the controversy and gives his views on the sector agenda of the incoming government, starting its term in January.

BNamericas: Why did ABTP request an investigation into anti-competitive practices in the port sector?

Silva: ABTP is the most representative association in the sector, with a total of 72 associated companies that together hold 233 port terminals in the country that handle the most varied types of cargo, including containerized cargo.

We decided to request an investigation into MSC and Maersk on the suspicion that they are abusing their dominance in maritime container transport to favor their own container terminals along the coast, raising costs and reducing options for cargo flow in Brazil.

The number of shipowners for containerized cargo has fallen. Globally, only eight or 10 companies do this kind of transport and [MSC and Maersk] operate mostly on the Brazilian coast.

In 2021, these two firms were responsible for more than 50% of container movement on the Brazilian coast, but this is not a problem we identified.

What we realized was that these companies, in addition to dominating container transport, also want to control land logistics and what they are doing is taking over the terminals in the country. Now they have seven of 19 terminals in Brazil.

BNamericas: What are the problematic practices specifically?

They are using their concentrated power, and this is causing problems for cargo owners because it increases logistical costs.

Having said that, it is important to say that this practice is affecting Brazilian logistics in general. They are closing the market to other terminals, even making it difficult for other terminals that are controlled by foreign investors.

We investigated their practices and decided to ask Cade to act because this has a direct impact on costs. Cade will assess how it will act to prevent such practices.

BNamericas: Can the practices of these two companies affect future terminal leasing auctions?

Silva: All leasing terminal auctions need to go through a thorough competitive analysis.

For example, in the lease of the STS10 terminal at Santos port, this condition would tend to continue. In view of this, [regulator] Antaq has already suggested that the participation of these companies be limited. Hence, they could only participate in the auction if no other company was interested.

These companies usually say that their participation will generate investments and bring more activity to the port sector, but this is not true. What brings movement are trade agreements signed between countries and not actions of logistics companies. In addition, investments in terminals are foreseen in the leasing contracts. Any company that assumes these contracts will make these investments.

BNamericas: Will the Santos port concession advance during the next government term?

Silva: The privatization of Santos port is already being analyzed by [audit court] TCU. There are uncertainties as to whether this concession will also include the lease of the STS10 terminal.

But comprehensively, we still do not have clear signals about the position of the elected government, if it is in favor of port privatization.

The previous Workers' Party administrations [led by Lula da Silva and Dilma Rousseff] worked on the creation of a regulation to attract private port terminals, but it is not clear whether they would be in favor of the concession of ports in general.

BNamericas: So could the outgoing government try to privatize the port still this year?

Silva: I think the deadlines are tight. Maybe this year the approval of the auction by the TCU and the publication of the public notice could happen, but it is difficult to hold the auction his year.

But I think that even before taking office, still during November, we will already have a clearer indication from the new government team to know whether they are in favor of port concessions.

Representatives of the consortium held a meeting with state governor to avoid the suspension of the concession contract.

Marco Aurélio Barcelos, head of highway concessionaire association ABCR, talks with BNamericas about the state of the sector.

Want to read more information about How competitive is Brazil's port terminals sector??