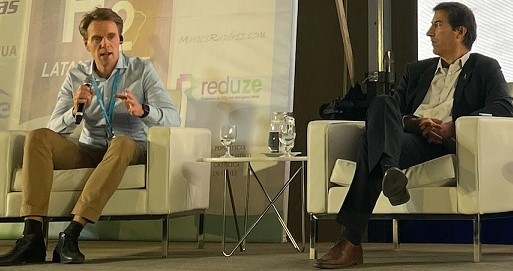 In Scandinavia, the company is piloting onshore and offshore wind-powered green hydrogen projects. In Spain, the firm is involved in a gigawatt-scale project.

The company has Chile on its radar – particularly gigawatt-scale projects in the country’s windswept south – and gave a presentation during Chilean green hydrogen event H2 Latam Summit, held recently in capital Santiago by organizer InnovationLab Chile and sponsored by the Chilean energy ministry.

Chile is advancing along the green hydrogen highway and has gigawatt and sub-gigawatt projects on the drawing board, targeting both the export market and domestic offtakers. A pilot production plant is in the construction phase.

Using grid-connected solar-wind complexes would enable operators to maximize – where necessary – use of electrolyzers by reducing periods when power is insufficient or simply unavailable. Off-grid would likely require dynamic Power-to-x plants or rely on solutions to mitigate the intermittency of renewables.

While green hydrogen is still in its infancy, countries that offer the most favorable operating environments are best placed to pull in investment and earn a place in the lead pack.

BNamericas: Could you give a brief overview of Power-to-X?

Tuxen: What we bring is, first of all, the project development aspect, where we work with clients on originating projects, finding projects for doing Power-to-X, assessing renewable resources, figuring out what it takes to construct the projects in certain locations.

The second part, of course, is that wind energy is going to play a very large role in the Power-to-X space and, there, we’re looking into how we can optimize products for this specific segment. From the Vestas side, we’re very committed to playing a large role in also supplying wind turbines.

Then we work with plant solutions: how you construct the whole plant around those turbines. And then finally we are also working on service products within Power-to-X. Those are really the four pillars.

Tuxen: Yes. Some people might call it a turnkey solution, all the way from renewables up to the green hydrogen molecule. That’s what we’re aiming for and where we have value to add.

Gismondi: We aim to be the technological partners of companies running these projects.

BNamericas: So, you could say Vestas is diversifying, in some regards, into green hydrogen?

BNamericas: Project financing support was mentioned during a presentation.

Gismondi: Yes, this is part of our traditional business; it’s not new. We are used to helping our customers get funding for their projects, via measures such as making our contracts and agreements bankable … on top of that, with our global supply chain, we are able to pull up funding resources out of multilaterals or export-grade agencies.

We play an important role in our customers’ financial model by bringing competitive funding for their projects.

BNamericas: A takeaway from the event is that Chile will see a prevalence of wind-solar hybrid complexes.

Tuxen: It’s quite typical. We see many of these projects being hybrids, people are pursuing hybrid projects. It depends a lot on where you are in the world; the closer you are to the equator, the more PV you will typically see in that hybrid split.

In many cases they are a bit out of phase with each other, so you can get a very high capacity factor on the plant and that is going to be important with many of these Power-to-X projects.

BNamericas: I’m guessing that’s the case in northern Chile, around Taltal, for example, where you have both solar and wind resources.

BNamericas: Would you partner, for example, with a solar developer to build this component?

Gismondi: We don’t see, today, a lot of value in just buying and installing solar panels because this is a very developed market; but [where we can add value] is in terms of control, the mix or blend of PV and wind and how you manage that. Our control system includes management of solar, hybrids, batteries, for example. The integration side of things is part of our job.

BNamericas: You see opportunities in Chile?

The same in the south, with wind, in the Magallanes area, where we see a very high wind capacity factor but, again, it’s not enough. This is where different technological concepts and solutions are under discussion.

Tuxen: Batteries can play a role in many cases, for instance, to maybe smooth out some of the fluctuations, but they’ll also be needed in many projects simply to be able to provide the backup power. There will be a need for that.

If you go completely off-grid, there will be a certain backup power need for all projects, just to keep the lights on during periods when there is, say, no wind or sun … I think most projects will be some kind of combination of wind, solar, maybe a little bit of battery … these types of approaches. And then the dimensioning of these components will depend a lot on what are the local renewable conditions, how many periods are there without wind, does the offtaker need a really steady supply…

BNamericas: Are you working on any projects in Chile?

Gismondi: We’ve been working in wind in Chile for many years. We’re today installing wind farms.

But, also, we are working with some customers that have important plans to develop large, utility-scale installations in Magallanes area in southern Chile, where all these technological challenges are present as well. We have a portfolio of projects where we are allocating resources and we want them to succeed with us. Our aim is to be their partners in the long run.

BNamericas: It’s a sensitive topic in Chile, but can you comment on the Faro del Sur wind project? Planned by Enel Chile and HIF and linked to a future Magallanes hydrogen plant, Faro del Sur was pulled from the environmental evaluation system over allegations concerning changes in permitting requirements. It is expected to be resubmitted.

Gismondi: I agree it’s a sensitive topic. The developer has the details; from our side … there is a need for consistent and predictable rules that are sustained over time, otherwise this would jeopardize any of these investments.

BNamericas: What are the main challenges now for the green hydrogen industry in Chile? A panelist mentioned, among others, transport logistics and permitting agility.

Gismondi: Those topics will affect the speed of development in Chile ... also capacity to install such large projects in a remote area; that’s a massive challenge [along with a major buildout of renewables capacity.]

The world is trying to go very fast and there is also competition for the same resources because capacity is limited. Chile is competing with the world for those supply chains…

BNamericas: Do you mean electrolyzers, for example?

Tuxen: It’s at a stage where many of the companies that supply them are maybe not super industrialized. They have been working a lot with niche sectors and electrolyzers have not really gained the scale that is going to be needed in order to supply the green hydrogen market. For them, green hydrogen is a completely new market, as it is for everyone else.

I think there are more challenges around the things Andrés mentions – how do we build these projects. They are off grid; they are in remote locations … how you finance the projects.

BNamericas: But, overall, you think the sector will take off sooner rather than later?

Gismondi: Absolutely. With the current situation in the world, with energy security right now under discussion and high prices of energy today, this is only accelerating that path.

We need to go from crawling to running; it’s more or less that. Those regions or projects that can better adapt to these challenges are going to be the ones that will be installed first.

It’s clear that Chile, in terms of wind resources as a base energy for hydrogen production, is world class. But it’s not just about that; all regions are competing for the same and the limited resources globally are going to be allocated to those areas that can grant faster access into the market.

Tuxen: What green hydrogen really brings to this [renewable energy] space is the ability to be able to transport the energy around the world. That’s a completely new concept for renewable energy. I think it is really something there is a need for.

Transmission planning and the implementation of a storage law are at the forefront of developers' minds as Chile faces another tough year for the p...