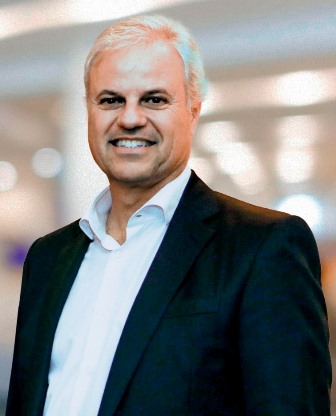 Located in São João da Barra, Rio de Janeiro state, Açu port was designed to support mining and offshore oil and gas exploration and production, and has turned into an industrial complex and important industry hub, with the establishment of infrastructure and several companies.

In its next transformation, Açu is planned to become an energy transition hub, with natural gas, solar and offshore wind power, and green hydrogen projects that will coexist with the fossil fuel industry.

BNamericas talks to Rogério Zampronha, CEO of Prumo Logística, which manages the port, about the plans.

BNamericas: What are Prumo's plans for 2023?

Zampronha: Before answering this question, I’d like to give a little context about Prumo.

Prumo is a holding company controlled by US fund EIG, which is the majority shareholder, and Abu Dhabi fund Mubadala. And we control several companies, such as Ferroport, which is a joint venture with Anglo American in the mining area, GNA [Gás Natural Açu], which has 3GW of thermoelectric plants, Vast [formerly Açu Petróleo], which accounts for 40% of oil exports in Brazil, and NfX, which is a fuel trading company.

Açu port was created with a view toward ore and support for offshore E&P [exploration and production]. And, in fact, this industry was consolidated based on Açu port, with several companies established there.

But I found in Açu a set of elements that make the port the best energy transition point in Latin America. To have a transition, you need abundant and cheap renewable energy, as well as freshwater.

The production process of green hydrogen, for example, depends on electrolysis. In the case of offshore wind, it’s necessary to have good winds and availability of the value chain, including vessels, which are used to support E&P in the area. We’re close to the southeast, which is the main electricity consumption hub in Brazil, without the need for long transmission lines. We also have space for the installation of an industry that manufactures wind blades and turbines, and for the bases of offshore wind generators.

Zampronha: We have a joint development agreement with Equinor. We expect this plant to be operational by 2025.

And we’re developing biomass projects for biogas production and all the products that come from biogas: biomethane, SAF [sustainable aviation fuels] and other biomass derivatives.

We’ve also approved a project to build a storage terminal for fossil fuels, biofuels and electro-fuels [such as ammonia and green methanol] for Vast.

Regarding offshore wind, we have agreements with EDF, Neoenergia, TotalEnergies and Equinor, and for green hydrogen with Shell, Linde, Neoenergia, EDF, and Comerc Eficiência.

The new purpose announced last week by Prumo is to help the world reduce its carbon footprint and accelerate the best of Brazil, which are its natural resources, people, privileged position and stability.

BNamericas: Of all these agreements linked to the energy transition, what has already come off the paper? Or what is the forecast?

Zampronha: This whole industry will define its pace of construction from the moment the first auction for the right of use of offshore areas [for energy generation] takes place, which we expect to happen by the end of this year.

Meanwhile, we’re licensing an area of 1 million square meters to accommodate hydrogen projects in the port.

BNamericas: What are Prumo's prospects in the oil and gas area?

Zampronha: I’ll start with natural gas. In December, we announced agreements with TAG [Transportadora Associada de Gás] and NTS [Nova Transportadora do Sudeste] to bring domestic gas to Açu port, both for the GNA I and GNA II plants and for other plants that will be installed there. It was a great achievement and a great growth lever for us. This natural gas path, which I consider a fundamental element in the energy transition, was a great move.

BNamericas: Will TAG and NTS compete or act concomitantly?

Zampronha: The two are large companies controlled by large groups with great capacity for business development. I can't say if, at the end of the process, both will build the gas pipelines. But, if only one does, we’ll be happy. If they both do it, we’ll be happy. There will be volume and demand for both. But it remains to be seen if this justifies having two pipelines or just one.

Regarding oil, we have the largest offshore support base in the world, with about 15 mooring berths, from Edison Chouest. There are plants [of flexible subsea pipelines] by TechnipFMC and NOV.

We have a lot of room for expansion of the oil and gas business in the port, including projects for decommissioning [platforms] and new pipelines to supply ships in the port.

Again, I highlight the Vast project. The oil transshipment is done in a sheltered area, with operational and environmental safety. The company has investments planned to increase local capacity to process local fuels and offload crude oil to refineries, to supply platforms and other vessels.

BNamericas: At what stage is the gas hub at Açu? Is GNA I operating normally? When does the second plant start operating?

Zampronha: GNA I started operating at the end of 2021. GNA II starts operating in 2024 or 2025. We have pre-licensed GNA III and IV, which are still without energy sales contracts. We’re analyzing the best moment to structure the projects.

BNamericas: Can these projects compete in this year’s auctions by regulator Aneel?

Zampronha: Without a doubt. We always consider the auctions. If it’s a good deal, we’ll enter, if not, we’ll wait for the best moment. We have a lot of discipline in capital allocation. It depends on how the Brazilian market evolves.

BNamericas: Has the rise in the price of LNG, amid the war in Ukraine, affected the operations of GNA I?

Zampronha: The contract that supports the operation of the plant considers the fixed cost plus the variable cost of operation, in addition to the cost of raw material, which generates our CVU [variable unit cost]. [National grid operator] ONS dispatches the thermoelectric plants according to the need for energy, regionalization and CVU cost. With CVU very much impacted by the LNG price and the favorable hydrological scenario now, we believe that there will not be much need to dispatch in 2023. Last year, we didn’t dispatch in at least eight months.

GNA I has the purpose of supporting the base load of the national system at specific times, and this will depend on the price. The fact is that the price of gas has fallen, and the plant is very competitive. But the decision to dispatch is not ours to make, and we’ll always be ready to dispatch within the established contractual conditions.

BNamericas: Does Açu have room for offshore shipbuilding construction, maintenance, and offshore decommissioning?

Zampronha: We look at these activities, and those in which we have a competitive advantage can be done at the port, where we still have 44km2 of retro area to occupy. It’s an immense area.

Açu is configuring itself as a logistics base also for other industries that are not related to oil, gas and energy, such as fertilizers. Our multi-cargo terminal will exceed, this year, the mark of 2mn t transshipped. We’ve imported the first heavy vehicles through the port, and we may become the main hub for vehicle imports in the country.

BNamericas: What investments are planned for the next few years?

Zampronha: We’re investing to expand the multi-cargo terminal, where new warehouses for copper concentrate and fertilizers are almost ready. There are the Vast projects, which will have a liquid terminal, as well as GNA III and IV and the NfX expansion. There is a huge list of projects, and the investments will be announced soon.

BNamericas talks to experts at Wood Mackenzie and Rystad Energy about the local E&P outlook.

Want to read more information about Why Brazil’s Açu port is embracing the energy transition?