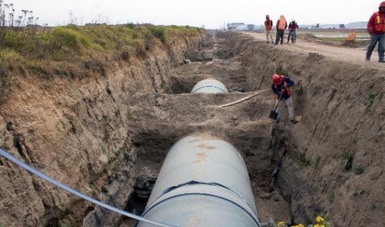 Plans to build a third pipeline for the Cutzamala water distribution system, which supplies some 16,000l/s to areas of Mexico City and the metropolitan area, are back on track following legal obstacles that halted progress last year.

During a press conference Thursday, the head of Mexican engineering firm Cipro, Manuel Salas Flores, said his company had snatched a contract to supervise the construction of one of the 77km aqueduct’s four stretches, signaling the project is once again moving forward.

“It is a 99-inch diameter steel pipe that will be installed parallel to the Cutzamala system,” he said.

According to records on procurement site Compranet, water authority Conagua, in charge of the project, awarded a 25mn-peso (US$1mn) contract to the firm in joint venture with Vadarioba, F Glez Consultores y Asociados and CAL Ingeniería y Proyectos in February.

Specifically, the firm will supervise works on the 25.7km section between the Analco-San José tunnel and the Pericos tank, according to the records.

Supervising works started on April 15 and the firm’s contract will conclude in April 2023, Salas said.

He also highlighted two other projects in the Caribbean and the Dominican Republic that total some 5bn Mexican pesos in public contracts.

Overall, the third line comprises four sections from the Villa Victoria dam to the Analco-San José tunnel, between the Villa de Allende and Lerma municipalities of Mexico state. Contracts for all four were awarded at the end of 2013.

A third line is deemed necessary to guarantee water services while maintenance or repairs are being carried out on the other two lines. The Cutzamala system was built some 40 years ago.

In June, Conagua said the the project was delayed due to legal conflicts with the consortium that won the first stretch, the same Cipro was hired to supervise.

Back then, Conagua also said the remaining three stretches were almost complete and the only one with the least progress was the Analco-San José tunnel-Pericos one.

BNamericas takes a look at the six projects.