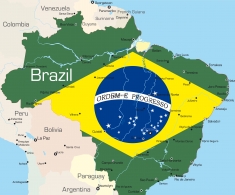 Brazil's federal audit court TCU is pushing for congress to halt or hold off funding for 10 infrastructure projects under the country's growth acceleration plan, PAC.

In terms of stopping work, one involves a project along the Oeste-Leste railway, known as Fiol, between the cities of Caetité and Barreiras in the northeastern state of Bahia. The court found deficiencies in its basic design plan, according to a report by local news service Agência Estado.

Civil works should be stopped along the Norte-Sul railway in the northern state of Tocantins due to overpricing of services and supplies, as well as the construction and paving of federal highway BR-488 in the southern state of Rio Grande do Sul, for the same reason, the court said.

Finally, TCU is asking congress to stop the building of a bridge over the Araguaia river along federal highway BR-153 in Tocantins. Besides deficiencies in its basic design plan, the project was overpriced, the report said.

Meanwhile, the court is also recommending congress to partially hold off funding for another six PAC projects due to various reasons. Among them are projects for urban train lines in Bahia state capital Salvador and Ceara state capital Fortaleza.

Others include work on the Sertão water channel in northeastern Alagoas state, a stretch of the Norte-Sul railway in the mid-western state of Goiás, the Abreu e Lima refinary in northeastern Pernambuco state capital Recife, and the Pirapama water supply system which is also in Pernambuco, the report said.

TCU's suggestions are derived from a study evaluating 136 projects partially or fully funded by the federal government between July 2012 and June 2013. They included work in the areas of aviation, transportation, energy, education and water infrastructure. The total budget on these works in 2013 alone was 34.7bn reais (US$14.9bn).

Local analysts see low probability of price hikes in the free energy market in the remainder of 2022.

The concession is expected to cover all 16 cities in the state, comprising a total population of 870,000 people.