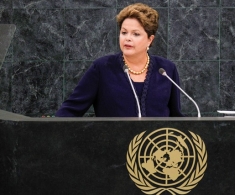 The Communications Security Establishment Canada (CSEC), the Canadian equivalent of the US National Security Agency (NSA), is said to have spied on the electronic communications of Brazil's mines and energy ministry ( MME), according to a report from Brazilian Globo TV's Fantástico show aired on Sunday night (Oct 6). The report was allegedly based on the latest series of documents that have been leaked by former NSA contractor Edward Snowden to Rio de Janeiro-based journalist Glenn Greenwald. The TV report was co-authored by Greenwald. Presentation slides appear to show that metadata of phone calls and emails from and to the ministry were targeted by the CSEC through a software program called Olympia. It was not clear whether the content of the communications had also been accessed. All the information was said to have been shared between Canada, the US, the UK, Australia and New Zealand. The network named as the target of the espionage is used by minister Edison Lobão and his contacts at oil giant Petrobras (NYSE: PBR) and power company Eletrobras (NYSE: EBR), as well as the national oil agency (ANP) and the national electric energy agency (Aneel). The same network is used by Lobão to talk with President Rousseff herself. Rousseff said on Twitter this Monday (Oct 7) that Itamaraty, Brazil's foreign ministry, will demand explanations from Canada. She also requested minister Lobão to review and strengthen MME's data protection systems. "The news that MME was targeted by espionage confirms the economic and strategic reasons behind such acts," Rousseff wrote on Twitter. "It is urgent that the US and its allies stop their espionage once and for all. This is unacceptable among countries that claim to be partners. We repudiate the cyber war." Before the TV show was aired on Sunday, Rousseff had already commented, also on Twitter, about the recent espionage cases involving Brazil, emphasizing that she had requested an explanation and a change in behavior from the US. She also said that Brazil's Marco Civil da Internet (Civil internet bill) is expected to be voted on in congress "in the coming weeks" and that, once approved, it will serve as basis for an international civil internet project to be proposed to the UN by Brazil. In a statement posted on the MME's website, minister Lobão wrote "The breach of the ministry's communication and data storage systems...is serious, as it suggests an attempt to obtain strategic information related to the ministry's work, and deserves our condemnation." He added that the ministry has one of the safest data protection systems in the world, but committed to a "rigorous evaluation and the strengthening of these systems and an analysis of what may have been the objective of the espionage." The CSEC said it does not comment on specific intelligence activities. Canada has several mining investments in Latin America. Brazil ranks fifth in Latin America for mining revenue contributions to Canada, according to the Canadian international development platform. Copper, gold and iron ore are Canada's top commodity priorities in Brazil. Among the Canadian companies that operate in Brazilian mines are YamanaGold, Eldorado Gold, Aura Minerals, KinrossGold and Luna Gold.

Abdib and Ibram are pressing their demands.

The initial capex of the project is estimated at US$126mn

Brazil set to publish notice for 6th mineral exploration round

Does Brazil have the potential to be a global lithium player?

How French firm Tereos is reaping efficiency with digitization