Colombia will add up to 38 areas to its 2019 permanent offer program for oil and gas exploration rights as the government ramps up efforts to replace dwindling reserves.

Hydrocarbons regulator ANH said the list of new blocks would be released by August, after results of the first round of the program are published.

"These proposed areas will be studied by the agency .... and may be part of the blocks that are offered in the rounds planned for the rest of 2019," ANH said in a statement.

The permanent offer process was launched in February, providing companies with the chance to propose exploration and production areas not previously auctioned by ANH. 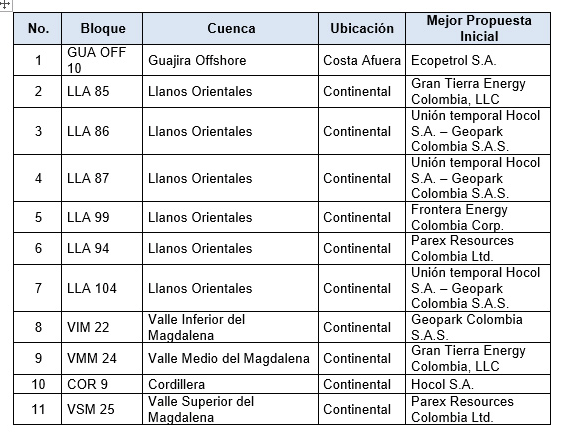 The announcement came as the agency published the names of companies that presented the best offers in the first round of the process.

A consortium comprising Hocol and GeoPark bid highest for three of the 11 blocks that received offers. Individually, Parex and Gran Tierra submitted two leading bids apiece while Frontera, GeoPark, Ecopetrol and Hocol presented one each.

Qualified companies can lodge counteroffers on June 26 and those that topped initial bidding will have the chance to trump any improved proposals on July 9. Contracts are expected to be signed on July 17.

According to the mines and energy ministry, the round could add 1Bb to Colombia's crude reserves, which currently have an expected lifespan of 6.2 years.

In related news, ANH has reinstated an Interoil contract for the Altair block and extended its expiration date to August 26, the Norwegian company said in a statement on Monday.

The company said it has requested an additional 12 months to complete the contract in eastern Colombia's Llanos basin because of force majeure.

And Amerisur said it completed logging operations at the Sol-1 exploration well on the CPO5 block, also in the Llanos basin.

Following testing, the rig will be deployed for drilling at the Indico-2 appraisal well, Amerisur said in a filing with the London Stock Exchange.

The Ministry of Mines and Energy highlighted the announcement made yesterday of three new gas discoveries on the Caribbean coast by the company Can...