Colombia to focus on illegal mining, formalization of small miners in 2021 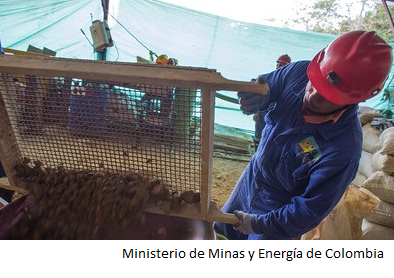 Colombia is currently making efforts to diversify its mining sector while boosting the country’s economy, and this year authorities will focus on two specific issues in the mining sector – formalization of small-scale miners and stopping illegal gold mining.

During the conference Encuentro Latinoamericano de Minería, organized by Colombia’s national mining agency (ANM), mining and energy minister Diego Mesa said that by the end of 2021 the authorities plan to have 21,000 small-scale miners in the country formalized.

The country is estimated to have over 110,000 small-scale miners and only 3,500 of them are currently formalized.

With support from the ANM, the Inter-American Development Bank and the United Nations Development Programme (UNDP), mining authorities are working on a strategy to facilitate access to bank loans for artisanal miners who need to improve their processes.

The pilot plan includes opening over 300 bank accounts for artisanal gold and coal miners in Antioquia, Boyacá and Santander departments.

Creation of new financing models are also part of the formalization plan for the sector, and national authorities and representatives of Colombia’s mercantile exchange (BMC) are in talks on this subject.

During the event, President Iván Duque emphasized that the government will not allow the stigmatization of mining activity due to illegal activities in the sector.

“Illegal [gold] mining has become the main source of income for illegal groups,” Mesa said during the event.

According to figures from Washington DC-based research and advocacy organization Global Financial Integrity, Colombia’s illegal gold mining activity generates around US$2.4bn annually, which is three times the value of the cocaine industry, according to some intelligence estimates.

Lawmakers are debating the national development plan, which includes a ban on new open-pit mining operations but would not affect those underway.

At a glance: 5 Colombian gold projects

The yellow metal accounts for about 7.6% of total exports and 32.2% of mining exports from the South American country.

Want to read more information about Colombia to focus on illegal mining, formalization of small miners in 2021?