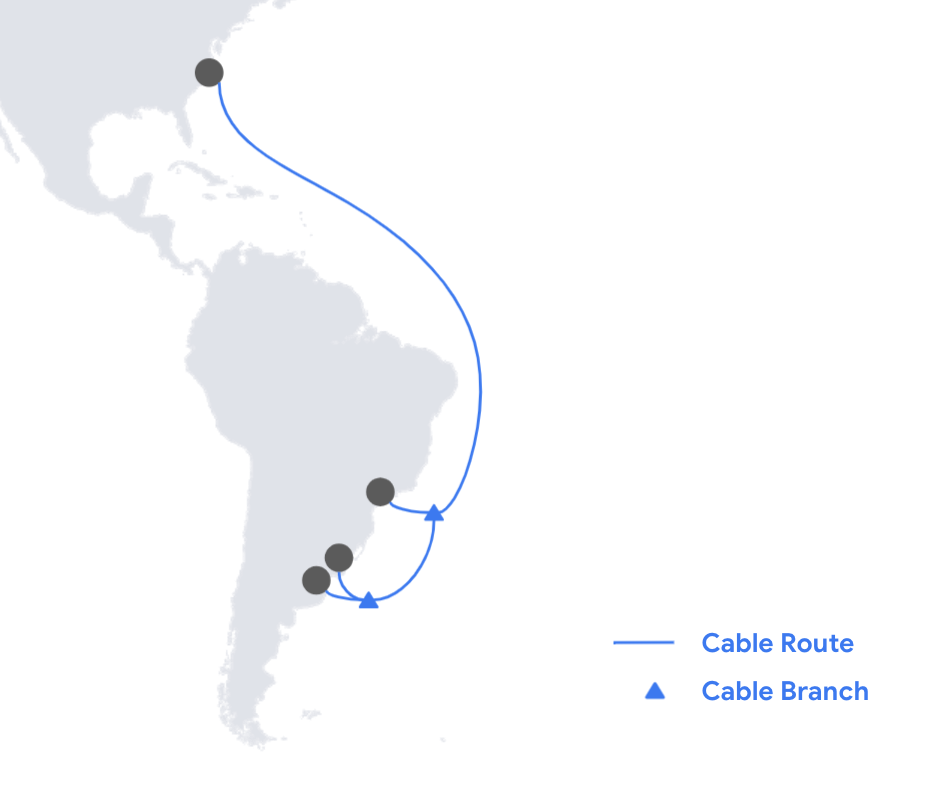 Google announced plans to build a second pan-American submarine fiber cable for its own exclusive use, this time running through the Atlantic and connecting the US to Argentina.

The cable will be manufactured and installed by SubCom and should go into operation by the end of 2023, Google said. Capex estimates for the project were not provided.

The system will run from the US east coast (probably Florida) to Las Toninas, Argentina, with landing points in Praia Grande in Brazil and Punta del Este in Uruguay (route pictured).

The first, Curie, was activated in 2019 and runs through the Pacific from the US to Chile, with 72Tb/s of bandwidth. A branch to Panama is currently in progress. SubCom was also the manufacturer of that system.

The announcement of the new cable in the Atlantic highlights the possibility that the internet giant is considering opening a new datacenter zone in one of the countries through which the cable will pass, Argentina or Uruguay being the top bets, although Google has not confirmed that.

Last year, citing government sources, Uruguayan outlet Búsqueda reported that Google had decided to invest around US$100mn in a datacenter at a tech park in the city of Canelones.

This datacenter, according to the report, would be be built on a 30ha site in the vicinity of Colonia Nicolich.

Uruguay’s industry, mines and energy minister, Omar Paganini, confirmed on Twitter at the time that the government had been engaged in talks with Google, but denied that any decision had been made.

“In our talks, Google expressed interest [in the project], although it is also considering other options. The company is in an evaluation process that we hope will have a favorable outcome for our country. However, it’s important to stress that the project is not yet a reality,” Paganini wrote.

Google also admitted that talks had been held, but did not confirm the project.

“At Google, we're always exploring possibilities to expand our global infrastructure. We're holding talks, still initial, about a potential project in Uruguay, but right now we have nothing to announce,” a company spokesperson told BNamericas at the time.

In addition to Curie and Firmina, Google owns other regional systems in Latin America, but all under a co-ownership format, that is, for non non-exclusive use.

One of them is Tannat, a JV with Uruguay’s public telco Antel and Telxius, the infrastructure subsidiary of Telefónica.

A first branch of Tannat connecting Maldonado (adjacent to Punta del Este) in Uruguay to Santos/Praia Grande in Brazil was deployed in 2018, while a landing point in Las Toninas, Argentina, which was planned from the beginning, was only authorized by Argentine regulator Enacom in July last year.

Last April, Telxius announced that the 2,000km system was active, adding to Telxius’ Brusa (Virginia Beach in the US to Rio de Janeiro) and Junior (Rio de Janeiro-Santos, also co-owned by Google) cables.

Google is also a co-owner of the Monet system with Uruguay’s Antel, Brazilian operator Algar Telecom and Angolan firm Angola Cables. This cable runs from Santos/Praia Grande in Brazil to Boca Raton in Florida, with a landing point in Brazil's Fortaleza.

The Tannat/Monet system has essentially the same route as the future Firmina cable. The difference, as stressed previously, is that all of the latter's capacity will be for the exclusive use of Google.

“As people and businesses have come to depend on digital services for many aspects of their lives, Firmina will improve access to Google services for users in South America,” the company said.

“With 12 fiber pairs, the cable will carry traffic quickly and securely between North and South America, giving users fast, low-latency access to Google products such as Search, Gmail and YouTube, as well as Google Cloud services,” it added.

A group headed by the infrastructure minister is presenting projects to financial players, but analysts are skeptical given the opportunities on of...

LatAm expected to benefit from US infra efforts to counter China

Washington is reportedly seeking to counteract Beijing’s Belt and Road Initiative, which, rather than competition, could have complementary effects...

Kansas City Southern Receives Revised Proposal from Canadian Pacific That Board of Directors Determines is a "Compa...

What to expect from China-Brazil relations in the coming years

Other companies in: Infrastructure (United States)