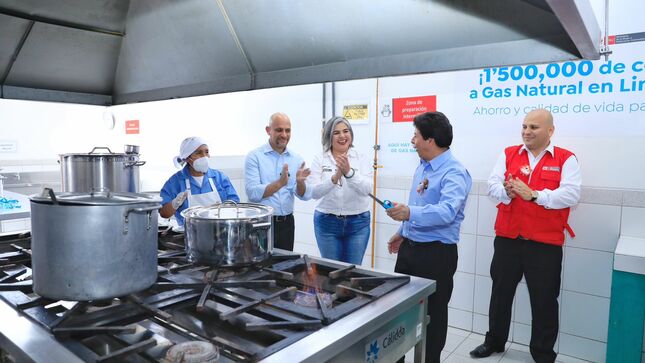 The Executive Branch ratified its commitment to accelerate the massification of natural gas, articulating efforts with private companies to have a greater number of connections and serve families, children, the elderly and all the most vulnerable Peruvians, at the national level.

During the recognition of the million and a half natural gas connection in Lima and Callao, the head of the Ministry of Energy and Mines (MINEM), Alessandra G. Herrera Jara, together with the President of the Republic, Pedro Castillo Terrones, and the Minister of Labor, Alejandro Salas, agreed that the government's goal is to make the country's natural resources available to households and reach a greater number of regions.

The minister announced that negotiations with regional governments are advanced to start more natural gas massification projects in the macro center and macro south, for this reason she invited the private sector to join this challenge that seeks to serve millions of Peruvians with a resource that It will provide energy at an affordable cost for the family economy.

The president, for his part, called on the elected authorities to work to meet the needs of the people and value the country's resources so that, together with private companies, they can ensure that the use of natural gas continues spreading to all corners of the country.

In turn, the representative of the Cálidda concessionaire, Martín Mejía del Carpio, stated that, in Lima and Callao, approximately 6 million people have access to natural gas, a figure that may continue to grow since there is a technical proposal to expand the connections to the elevated areas of the city, allowing homes located in the hills to have this energy source.

These announcements were made from the "Año Nuevo" Integral Family Development Center (Cedif), located in the Comas district, a public social support institution that cares for 250 boys, girls, adolescents, and older adults in vulnerable situations. and that from today it has a connection to natural gas for the kitchen and hot tub, improving its benefits for the benefit of this vulnerable population.

Want to read more information about Massification of natural gas is aimed at all Peruvians, especially the most vulnerable?