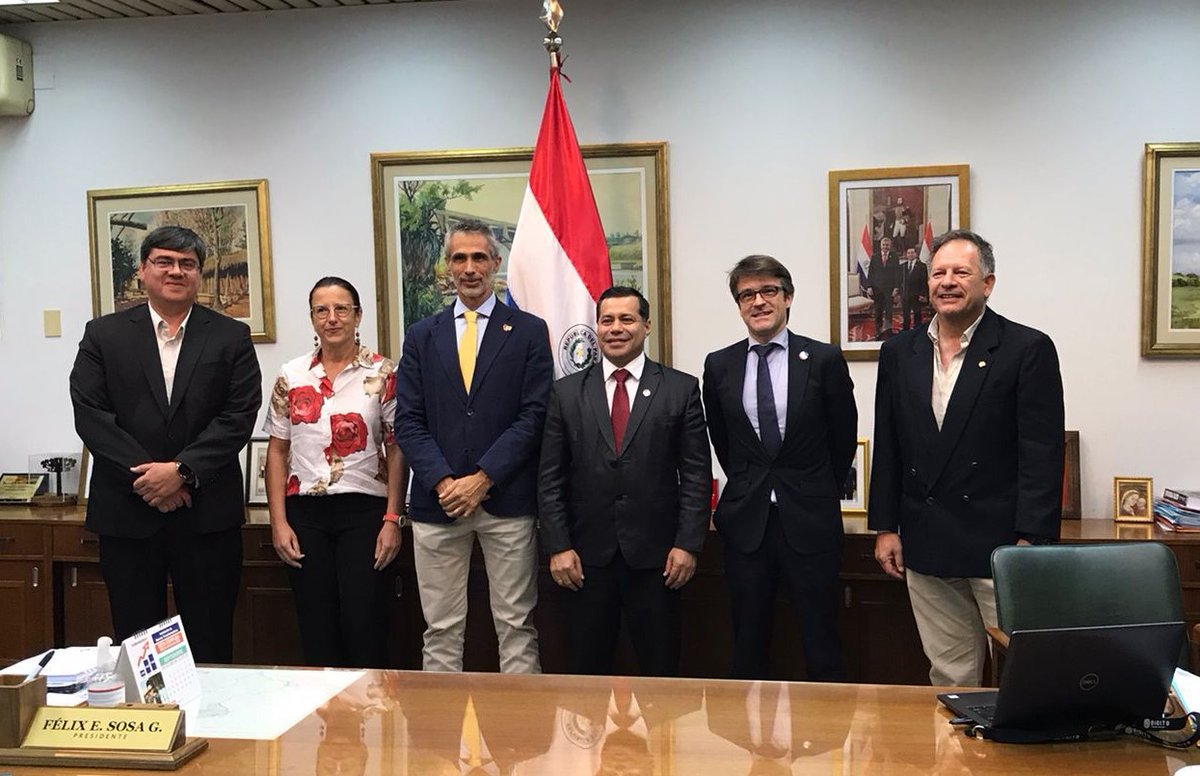 This is an automated translation of the original Ande release published in Spanish.

In order to identify opportunities to support the necessary investments to continue strengthening the Paraguayan Electricity System, the President of ANDE, Mr. Félix Sosa, the Director of Planning and Studies, Mr. Tito Ocariz and the Head of the Division of Investments, Mr. Pedro Cuevas met with the representative of the European Investment Bank - EIB and Manager for Latin America and the Caribbean, Mr. Juan Gorriño and the representative of the European Union, Mr. Matteo Sirtori.

This meeting was held within the framework of the Programming Mission carried out by the European Investment Bank, in order to analyze the support of this Multilateral Bank for the necessary investments and to deepen the future work agenda of the needs of ANDE.

Mr. Félix Sosa presented the Master Works Plan, in order to jointly evaluate the needs and possibilities of obtaining new financing. It should also be noted that several works financed by the EIB are currently being executed, also co-financed by CAF, CFA 10613 - "Project for the Improvement of the Electricity Transmission and Distribution System of the Metropolitan System of Paraguay - Phase II.

Among the main works financed by the EIB are the Expansion of the Caaguazú Substation, the Repowering of the 66 kV Underground LT, Central - General Diaz - Republicano, the Construction and Interconnection of the Alto Paraná 220/66/23 kV Substation, the Improvement and Reinforcement of the Distribution System of the Metropolitan Area, the acquisition of Supply and Installation of 500 kV Reactor Banks for the Villa Hayes Substation, the acquisition of Single-Phase Electronic Meters for direct measurement and Synthetic Material Cover for LV Meter Niches , and the construction of the current 500 kV Yacyretá-Ayolas-Villa Hayes Line.

USD 231 million to scale up electric mobility in Panama, Paraguay and Uruguay

CAF -development bank of Latin America-, with the support of the Green Climate Fund (GCF), will promote electric mobility in Panama, Paraguay and U...

ANDE completed a round of public consultations in the Central Chaco

There is a "firm decision to promote" the production and use of biofuels in Paraguay, said Minister Castiglioni

Atome in talks to expand phase 1 of Paraguay project

Indian delegation of the companies ISA and NTPC, made a technical visit to ANDE

Other projects in: Electric Power (Paraguay)

Other companies in: Electric Power (Paraguay)

Want to read more information about Meeting with representatives of the European Union and the European Investment Bank?