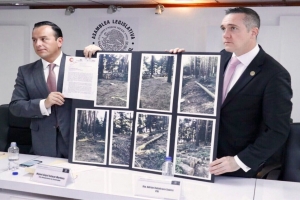 An opposition party leader in Mexico City's lower house and the head of the capital's Cuajimalpa district have called on federal and state authorities to promptly halt work on the Mexico City-Toluca interurban passenger rail line.

Speaking to reporters on Tuesday, lawmaker Adrián Rubalcava and Cuajimalpa delegate Miguel Ángel Salazar - both members of President Peña Nieto's party PRI - said that the project is creating severe environmental damage, due to the indiscriminate logging of trees in a forest located in the rail's proposed route.

Rubalcava and Salazar requested the Mexico City government, as well as the federal transport and environmental ministries, SCT and Semarnat respectively, provide information on the project's environmental impact assessment. According to the politicians, one of the areas which rail line is being built through is considered a natural conservation area.

The officials also demanded that the environmental damage reportedly caused by the project's construction be reduced with the implementation of mitigation measures.

"Some 350mn pesos in funds are needed to mitigate the effects of the interurban rail line. We need the infrastructure to carry out works without limiting mobility and water distribution," Rubalcava is quoted as saying in a Mexico City assembly statement.

"We will presently submit a motion requesting that the city government completely halts work on the project, as long as the tree logging situation is not addressed," he added.

The officials noted that if their requests are not addressed, they will undertake the corresponding legal actions to ensure the project's suspension, reports local newspaper El Universal.

The 57.7km high-speed rail project that will link the cities of Toluca and Mexico City is one of the federal government's key projects. The project involves the construction of a 4.5km tunnel to avoid damaging environmentally protected areas in Cuajimalpa district.

Although the route had already been modified once, following complaints from residents of the high-end Santa Fe neighborhood, some of the areas' local farmers have continued voicing their concerns regarding the project's environmental effects.

The project's construction progress has reportedly reached the 70% mark.