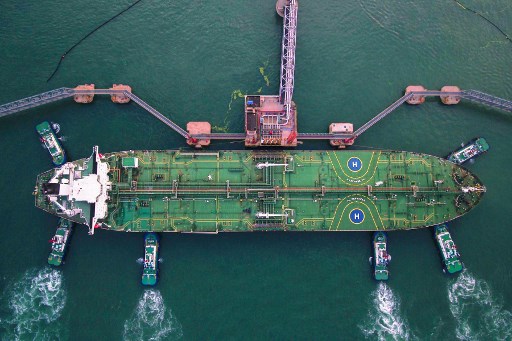 New Fortress Energy is rapidly advancing with plans to build LNG terminals in electricity-starved regions with two new ones under construction on the Pacific coasts of Mexico and Nicaragua.

These two new facilities will add to three plants the firm now has in operation across Jamaica and Puerto Rico.

As the New York City-based electricity firm aims to turn a profit, it announced that the fourth quarter of 2019 was the first where it notched a positive operating margin on sales of gas that averaged 538,000 gallons per day (g/d).

The operating margin reached US$1.3mn as for October-December, up from a negative operating margin of US$4.9mn in the previous quarter. However, the company made a net loss of US$38.4mn in 4Q19, whittling down the US$54.4mn loss reported in 3Q19.

“Pretty much in every respect it marks the best quarter we’ve ever had since we’ve been a public company,” said founder and CEO Wes Eden in a quarterly earnings conference call on March 4.

It continues a trend toward smaller losses, already turning toward slight gains in the case of the operating margin, as the firm that went public a year ago transitions from what Eden termed “a development company building stuff” to “an operating company running stuff that generates revenues.” 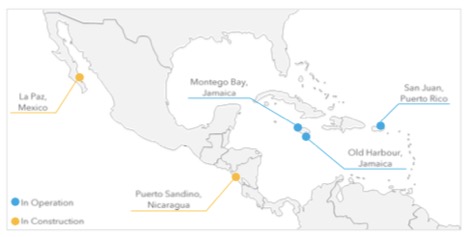 A major key to that transition is the New Fortress terminals that were completed last year in Jamaica and Puerto Rico, with two more major LNG terminals under construction in Mexico and Nicaragua.

“The goal is to generate US$250mn of committed operating margin in 2Q2020, growing to US$450mn based on existed committed volumes once Puerto Sandino and La Paz get up and running,” said Eden.

Among New Fortress’s most promising projects under development are a terminal in La Paz in Mexico's Baja California state and another on Nicaragua’s Pacific coast at Puerto Sandino.

Eden explained that the expected revenue growth from completing the terminals in Nicaragua and Mexico could alone double the company’s stock price.

Those two terminals are largely replicas of the company’s existing Caribbean terminals. 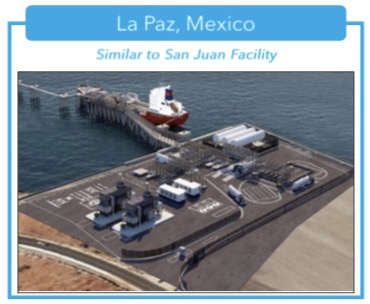 “The La Paz terminal is very similar to what we’ve done in San Juan [Puerto Rico],” said Brannen McElmurray, chief development officer at New Fortress Energy, noting that about 90% of the facility was the same.

New Fortress aims to bring the La Paz terminal online later this year, and it estimates a full operating capacity of 450,000g/d for the terminal.

The Nicaragua terminal is in a pre-construction phase. With New Fortress having signed already a PPA, the company is ramping up quickly to bring the terminal online in 2Q21. 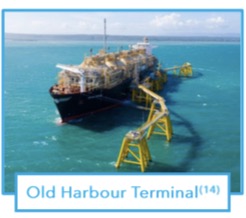 The Puerto Sandino facility includes a floating storage and regasification ship (FSRU) that will be just offshore, similar to the company’s existing FSRU at its Old Harbour power plant in Jamaica.

Located not far from the Pacific side of the Panama Canal, New Fortress executives said the terminal would not serve as appetizer to Nicaragua’s electricity-starved energy market, but would allow the company to position itself as a regional storage hub for its Pacific operations.

The two terminals represent the company’s expanding focus. Having started out with a focus on supplying gas to Caribbean markets, it is now expanding operations in Mexico and through Central America in a bid to tap markets where there are “large populations and growing economies,” Eden said, and where “they have inefficient and outdated infrastructure.”

New Fortress’s plans to build the terminals and serve neglected regions of Latin America come amid major changes in the natural gas market.

“LNG prices have fallen precipitously over the last 12 months,” Eden said, down 70% on a spot basis. New Fortress executives also mentioned that the company bought about US$1bn-worth of gas at historically low prices in late January and has the storage capacity and cash to buy more.

Longer-term, New Fortress Energy aims to have 20 terminals capable of holding 1-3 million gallons (Mg) of gas, giving the company a total electricity-generating capacity of 8-24GW at an operating margin of US$2-9bn.

But the goal is not just to lift revenue. “I want to be zero-emissions as an operating company in 10 years,” Eden said. “Today we deliver low-carbon natural gas-fired power. Substantially better than oil-based power, obviously much much better than coal-based power,” Eden said, noting that this was a critical step in the right direction, albeit one “still based on a fossil fuel.”

That eventual transition, Eden said, would likely involve the use of green hydrogen. “Tomorrow, we aim to be the world’s largest IPP and entirely emission-free,” he said.

Despite reporting a $167m net loss, New Fortress Energy described the period as a turning point with sales set to take off at its Caribbean operati...

The country's healthy reserve margin would curb the near-term need for the project, according to a study.