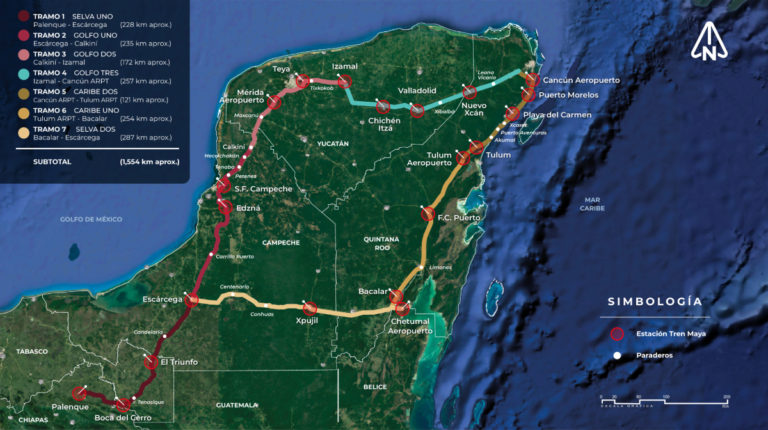 The Mexican government still has some 500km of rights-of-way to secure before continuing construction for the last two stretches of the more than 200bn-peso (US$10bn) Maya tourist train connecting five southeast states.

Although negotiations to acquire the remaining rights continue, President Andrés Manuel López Obrador hinted that his administration may not complete the last stretch by 2024 when he leaves office.

During his morning press conference on Monday, the president said the government has so far acquired rights to 1,000km of the 1,500km rail line. However, obstacles remain on the two stretches being constructed by the armed forces – stretch six from Tulum to Balacar in Quintana Roo state, and stretch seven from Bacalar to Escárcega in Campeche state.

"Now we have to release the section from Tulum to Escárcega," he said.

Works on the remaining two stretches reportedly started months ago but as they are in the hands of the armed forces their status is subject to a lack of transparency.

López Obrador said the main problem is with a group of communal landowners in Xpujil and Chetumal in Campeche state, where the 287km stretch seven is planned.

“There are five communal lands where leaders do not want the train to pass through, or they do want it, but they are subjecting that to the infrastructure, communications and transportation ministry paying them compensation for a highway in Chetumal that was built at the end of the 1960s or the beginning of the 1970s,” he said.

According to the president, the agreement to build the rail line stipulates that landowners will be benefited as partners, but it also states that compensation cannot be higher than that.

If owners still decide to oppose the project, López Obrador said the government will attempt to build the line where it can secure rights-of-way and stretch seven will be canceled.