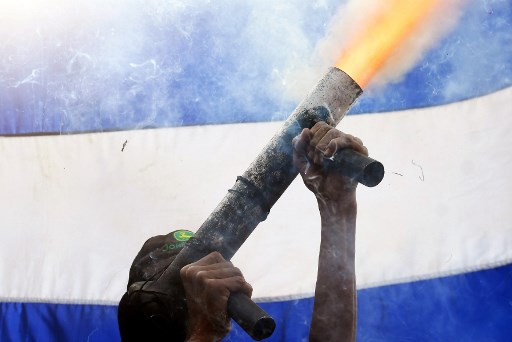 New York, January 25, 2019 -- Moody's Investors Service ("Moody's") has today changed the outlook to 'negative' from 'stable' on the Government of Nicaragua's long-term issuer ratings and affirmed the ratings at 'B2'.

The change in outlook to negative reflects Moody's view that a prolonged sociopolitical crisis in Nicaragua is weighing on the sovereign's economic and fiscal strengths. With no resolution to the ongoing conflict in sight, the crisis could materially weaken the government's credit profile. The negative outlook also incorporates the possibility of rising liquidity pressures on the Nicaraguan government if official financing from multilateral institutions were to decline materially as a result of increasing international pressure.

The affirmation of Nicaragua's B2 ratings considers that despite Moody's expectation that government debt metrics will likely deteriorate in the coming years, Nicaragua will continue to report lower debt ratios than those of its B-rated peers. A government debt structure characterized by a very long maturity profile and a large share of official external credit will also support the B2 rating, both of which mitigate rollover risks. Despite the challenges posed by the political crisis, Moody's also considers that macroeconomic policy has remained prudent, signaling policymakers' willingness to adjust in the context of adverse economic conditions.

RATIONALE FOR THE CHANGE IN THE OUTLOOK TO NEGATIVE FROM STABLE

PROLONGED POLITICAL CRISIS IS WEIGHING ON ECONOMIC AND FISCAL STRENGTHS

Moody's estimates that real GDP declined by 3.2% in 2018 and that it will contract again this year by 1.0%-2.0%. Furthermore, the rating agency now expects that the economy will not return to its previous trend growth rates of over 4.5% and instead projects economic activity to remain subdued, reporting average annual growth of around 2.5% in 2020-22. This contrasts with Moody's previous view that, following a resolution of the political crisis at some point in 2018 and overall weak growth in 2018-19, the economy would recover back to trend growth by 2021-22. The agency expects that investment will remain weak over the coming years with foreign direct investment (FDI) reporting lower levels than in the past when net FDI inflows averaged 7% of GDP. Additionally, due to a combination of lower government revenue and funding constraints, the authorities will reduce expenditures -- particularly public investment -- which will also weigh on growth. The tourism sector, an industry that has performed well in recent years, will not recover to levels seen in 2017 until 2021-22. A weaker growth performance will undermine Nicaragua's economic strength, which is already constrained by wealth levels and the size of the economy below that of B-rated peers.

Weaker economic activity will affect the fiscal accounts via lower revenue. Although the authorities have sought to limit the deterioration of the fiscal accounts, lower revenue and rising pressures from the pension system -- following a failed reform attempt last year -- will contribute to the deterioration in government debt metrics. Moody's forecasts the debt-to-GDP ratio will rise to about 40% by 2020 from 34% in 2017, while the interest-to-revenue ratio will increase to about 8% from 4.4%. Higher debt and interest burdens will undermine Nicaragua's fiscal strength.

Liquidity risks in Nicaragua are rising on account of (1) lower FDI inflows; (2) deposit outflows from the banking system, (3) declining foreign exchange reserves; and, (4) prospects of reduced financing from multilateral institutions.

Net FDI inflows amounting to 7.2% of GDP on average in 2014-17 covered a significant portion of Nicaragua's current account deficits, reducing the country's reliance on external debt financing. In 2018, net FDI inflows fell 26% in January to September (year-on-year) as a consequence of the political crisis. Moody's expects FDI inflows to decline again in 2019, which will increase external borrowings.

Another element affecting reserves has been deposit outflows from the banking system. Following the onset of the political crisis, deposits in the banking system declined by more than 25% between April and December, with a large share of those withdrawals involving dollar deposits, which account for 75% of total bank deposits.

Foreign exchange reserves reported a large decline last year. After peaking at $2.86 billion (21% of GDP) in April 2018, reserves fell by $712 million through December. Over the past decade, reserves increased steadily, supporting Nicaragua's crawling peg exchange rate regime -- a policy feature that operated as a strong anchor of market expectations vis-à-vis the exchange rate. Should the reduction in reserves resume in 2019, this would put additional strain on the external accounts and the exchange rate regime.

Potential disruptions to official external lending to Nicaragua, in particular from multilateral development banks (MDBs), would generate additional external liquidity pressures. The Nicaraguan Investment Conditionality Act (the "Nica Act"), which became law in the US in December 2018, calls for conditioning US approval of multilateral loans to Nicaragua on the "government's adherence to democratic norms." Some Latin American governments could support the conditioning of new loans to Nicaragua, following measures undertaken by the Organization of American States (OAS), potentially impacting new loans for 2020 onward. Moreover, Moody's considers that Nicaragua faces risks that already approved loans for 2019 could be suspended if international pressure increases.

RATIONALE FOR THE RATING AFFIRMATION AT B2

Nicaragua's government debt structure is another credit feature that supports the B2 rating. Although over 90% of government debt is denominated in foreign currency, the fact that official lenders -- mainly MDBs -- make up the majority of the government's creditors and that this debt has a long maturity profile reduces credit risks. Unlike other sovereigns that received debt forgiveness under the Heavily Indebted Poor Countries (HIPC) Initiative over the past decade, Nicaragua did not access the international bond markets, a condition that limits its exposure to volatility in international financial markets.

Despite very weak institutional strength, Nicaragua's macroeconomic policymaking developed a track record of prudent policies in the face of shocks over the past decade. Moreover, although the severity of the economic toll of the political crisis has limited the effectiveness of the monetary and fiscal policy response, authorities have shown a willingness to adjust under very adverse conditions.

WHAT COULD CHANGE THE RATING DOWN

Moody's would likely downgrade the rating if it became apparent that the authorities were unwilling -- or unable -- to adjust policies to mitigate the effect on the fiscal and external accounts of deteriorating macroeconomic conditions prompted by the ongoing political crisis. Indications that international pressure was leading to a significant reduction in the flows of official external financing would significantly increase credit risks, raising the prospects of heightening government and/or external liquidity risk materially weakening Nicaragua's credit profile.

WHAT COULD CHANGE THE RATING UP

Moody's would consider stabilizing the outlook if an impending resolution of the political crisis led to a stronger-than-expected recovery in economic activity and eliminated liquidity risks associated with a possible decline in external official financing.

Default history: At least one default event (on bonds and/or loans) has been recorded since 1983.

The principal methodology used in these ratings was Sovereign Bond Ratings published in November 2018. Please see the Rating Methodologies page on www.moodys.com for a copy of this methodology.

The weighting of all rating factors is described in the methodology used in this credit rating action, if applicable.

Capital flight in Nicaragua speeds up after cenbank move

A decision by the central bank to take control over the commission banks pay on the purchase of US dollars has been taken as a de facto devaluation...

In its biannual report, the UN's economic commission for Latin America and the Caribbean commended fiscal responsibility efforts in the region but ...